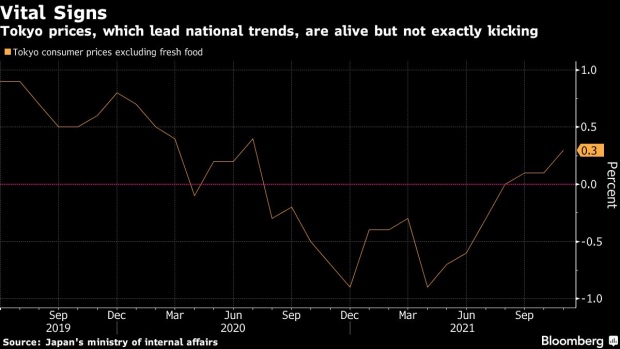 A board displays fuel prices at a gas station in Tokyo on Nov. 19. Photographer: Toru Hanai/Bloomberg , Bloomberg

(Bloomberg) -- Higher fuel prices drove up Tokyo’s cost of living at the fastest pace in 16 months, although the increases were still tiny compared to those confronting consumers in other economies where central banks are pulling back pandemic-era stimulus.

Prices in the capital, excluding those for fresh food, increased 0.3% in November from a year earlier, the ministry of internal affairs reported Friday. The result matched the median estimate from economists.

Overall gains continued to be limited by plunging mobile phone fees, even as gas prices surged 28%.

Japanese inflation, long a global laggard, is slowly but steadily picking up after climbing above zero at the end of summer amid spiking global commodity prices that have boosted costs for local businesses to a 40-year high.

The latest inflation data comes after Prime Minister Fumio Kishida on Wednesday announced the release of national oil reserves in concert with the U.S. and other nations to cool surging crude prices. Japan’s gasoline prices at the pump have risen to a seven-year high.

Still, the country’s consumer price gains remain far below the Bank of Japan’s 2% target, locking the central bank into its stimulus for the foreseeable future even as the Federal Reserve and other peers start to change direction.

Lower fees for phone services, which have dropped this year under government pressure, continue to weigh on the overall prices. Stripping out the phone factor, core inflation would likely hit 2% nationwide this month, according to Dai-Ichi Life Research Institute.

“We expect Tokyo’s CPI gauges to pick up further in December on higher import prices.”

BOJ board member Junko Nakagawa, in an interview with Bloomberg this week, said she sees upward price pressure starting to emerge due to rising oil prices and a weaker yen, which boosts the cost of the nation’s imports.

Even as Japanese businesses grapple with climbing costs for raw materials, most are still reluctant to pass their pain on to consumers, who are known for being very price sensitive after years of deflation and anemic wage growth.

One risk for the economy is if higher gas prices start to discourage shoppers. Consumer spending is key to the recovery now that the virus is coming under control and with traditional growth drivers of trade and manufacturing being squeezed by global supply chain issues.