From spiking mortgage rates, to intervention at the provincial level, and the unknown of what Canada's finance minister has in store next week, BMO Capital Markets' senior economist isn't mincing words about the stakes for domestic housing markets.

"There is now a full-scale attack on Canadian home prices across various levels of policy," wrote Robert Kavcic in a note to clients titled "House prices in the crosshairs."

A chronic supply crunch in large cities and their surrounding regions has put affordability under the microscope across the country. The Canadian Real Estate Association said national inventory levels were at an all-time low in January and last December, which sent the non-seasonally adjusted aggregate home price index up by record 28 per cent year-over-year in January. 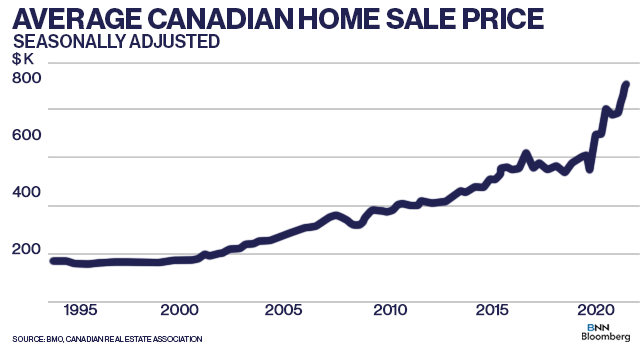 Kavcic pinpointed four factors that could disrupt the surge in home prices that has pushed affordability farther out of reach for many first-time homebuyers.

Two of the items Kavcic highlighted are new provincial moves that were announced Tuesday: the higher and expanded tax on non-resident homebuyers in Ontario, and the two-per-cent tax on foreign homebuyers that was unveiled in Nova Scotia's budget.

He also pointed to a recent jump in mortgage rates as anticipation builds for additional rate hikes from the Bank of Canada. A number of economists (including at BMO) have recently made the case for a half-point hike at the bank's next policy meeting in April; and there are also calls from Citi and BofA for half-point hikes at each of the next three rate-setting meetings.

Already, moves in the bond market have made fixed-rate mortgages more expensive as the trend-setting yield on five-year Government of Canada bonds reached almost 2.5 per cent over the last week, compared to 1.25 per cent at the end of 2021.

"Five-year fixed (mortgage) rates are already around four per cent, and variable rates should be well into three-per-cent territory by early summer," Kavcic wrote. "This market was feasting on low-one-per-cent rates through the pandemic. No longer."

Layered on top of all of that, Kavcic said it remains to be seen what Deputy Prime Minister and Finance Minister Chrystia Freeland will include in the federal budget on April 7.

The Liberal Party of Canada campaigned in the last election campaign on an extensive plank of measures designed to improve home affordability. One of the promised policies was a two-year ban on home purchases by foreign buyers. However, details on the implementation of that tax haven't materialized; and, indeed, a senior Ontario government source told BNN Bloomberg in December that the lack of progress was compelling the province to take matters into its own hands by hiking its tax on non-resident buyers.

Housing Minister Ahmed Hussen was directed by the prime minister in a December mandate letter to honour the campaign pledge on foreign buying activity, as well as other measures including an anti-flipping tax on residential properties.

“The work is ongoing and we’ll have an update to share in the coming weeks,” said Daniele Medlej, a spokesperson for Hussen, in a phone conversation Wednesday.