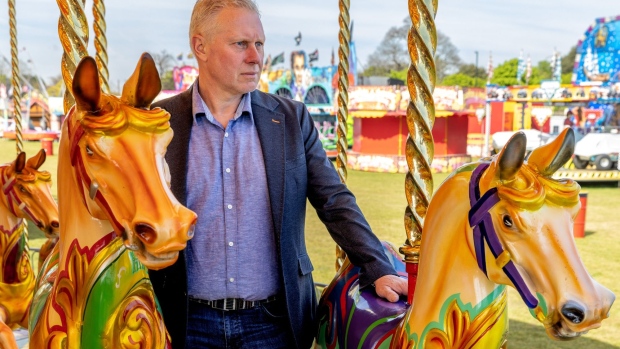 (Bloomberg) -- Chris Keen runs Inflatebounce, an indoor arena the size of a football pitch that’s full of bouncy castles and other play equipment for kids. He has a novel idea to address the energy costs that are driving inflation to the highest rate since he was one himself.

“If we could harness the power of bouncing children, we could sell it back to the grid,” said Keen, 50. “I’d be a millionaire, especially on the weekends.”

Keen’s response might be tongue-in-cheek, but his predicament is increasingly serious. The burden of heating, lighting and powering a business is getting more onerous just as the UK economy is forecast to deteriorate more rapidly while taxes and borrowing costs rise.

That’s a worrying combination for a leisure industry reliant on consumers being able to afford some fun when their incomes are being squeezed by the most since the 1980s. Charities say more people are even being forced to choose between heating and food.

The Office of National Statistics regularly surveys companies on their main concerns. In the last one, which ran through April, they cited energy costs as the biggest factor that’s forcing them to consider raising their prices.

Keen said his electricity costs have more than doubled to 4,000 pounds ($4,950) a month from 1,400 pounds. His firm’s gas bill rose to 5,000 pounds from 2,000 pounds. That’s on top of an increase in consumer and business taxes after temporary cuts to help ease the pain of the pandemic.

To help remain profitable, Inflatebounce increased entrance ticket prices by 20% and now shuts on Mondays and Tuesdays because it’s just not commercially viable. On a good day, the arena can host up to 500 children, but Keen still needs to inflate all the play areas even if the venue isn’t full.

The malaise comes from the more than doubling of gas and electricity prices over the past year, starting with a supply shortage as economies recovered from coronavirus and now exacerbated by Russia’s war on Ukraine.

The UK’s cap on energy prices, originally designed to protect consumers from sharp increases, was lifted 54% on April 1 and is predicted to jump again at the next adjustment in October. The regulator, Ofgem, this week proposed adjusting the cap four times a year to allow people to benefit more quickly from any future drop in the market. Businesses, though, aren’t protected by the cap and are more exposed to daily price fluctuations.

In addition, there are the increases in diesel and gasoline prices because of the war that are impacting businesses reliant on vehicles or generators, including travelling fairs and circuses, another cornerstone of British summer fun.

Zippos Circus at Blackheath in southeast London uses about 2,200 liters of diesel a week, doubling in the cooler months because of heating, according to founder Martin Burton. The government allowed fairs, circuses, farmers and fishermen to continue benefiting from reduced taxes on rebated diesel, but the price has still doubled, an “existential threat” to his business, Burton said.

“There’s only one solution unless we resolve the energy issues and that is to put up the ticket prices,” said Burton, 68, who is also chairman of the Association of Circus Proprietors.

But businesses are competing for British disposable incomes at a time when the outlook is worse than during the depths of the global financial crisis that started in 2008.

At Alton Towers in central England, one of the country’s most iconic theme parks, the focus is very much on pricing: how to cover the jump in costs — including demands for higher wages among many of its 2,000 employees — without making entry prohibitive for the paying public.

When the energy price cap rises again in October, “people will have to make hard choices about what they’re prioritizing,” said Francis Jackson, the resort’s director of operations. “That puts challenges on us in terms of how we price ourselves and how we operate.”

The park, which also has various on-site hotels and luxury treehouses for overnight stays, is working toward better energy efficiency, with greener rides and attractions introduced each year. But the older, often more popular rides are its most energy intensive.

Rita, the first hydraulic launch rollercoaster of its kind in Europe when it opened in 2005, powers visitors to a height of about 18 meters (60 feet), reaching 100 kilometers (62 miles) an hour in 2.5 seconds, using a short, hefty burst of energy. Jackson said Alton Towers “wouldn’t be forgiven” by customers if it shut down those rides that are more expensive to run.

So much of the trouble comes down to the way Britain’s energy market works. Even if wholesale prices ultimately drop, consumers will keep on paying for the cost of dealing with the failure of more than two dozen smaller suppliers that went bust when prices surged last year.

The Federation of Small Businesses has been calling on the energy regulator and government to introduce some kind of support for its members. Paul Wilson, the organization’s policy director, said many are worse off than household consumers: they don’t have a bespoke deal with suppliers and they don’t qualify for the support home energy users can qualify for later this year.

“For some businesses, it might be the final straw, which is why now is the time for not only Ofgem but also the government to step in,” he told members of the UK Parliament’s Energy and Industrial Strategy Committee in March.

Sadie Shard has owned the Crescent Hotel in the seaside town of Scarborough, Yorkshire, since 2014. The 32-year-old is dreading the coming winter and is desperate for a good summer to carry her business through and avoid having to close in the colder months to save money.

Until last November, the 21-bedroom hotel had energy bills of no more than 2,000 pounds per month, with electricity and gas used to cook breakfast, lunch and dinners as well as heating rooms. But then her supplier failed and she was forced onto a new rate at another company.

The cost jumped fivefold, with bills reaching as high as 10,000 pounds a month. She’s since been able to negotiate the rate down by 25%, but it’s still a huge expense, Shard said. Then there are the firms she uses who are also struggling with rising energy bills. They are putting their prices up too. The laundry service, for example, is urging customers not to request towel washes every day, she said.

Shard had to increase room prices to maintain a level of profitability and pay her 20 staff. And the more prices rise, the bigger risk there is that people won’t come and stay anymore, or they’ll shorten their trips. Indeed, she found out first-hand what choices vacationers now face during a trip to the Lake District in northwest England during the Easter break last month.

“Before you might have looked at going away two or three times a year in the U.K., now it’s a real luxury,” said Shard. “It’s so expensive to go out to attractions, so we spent more days just playing in the park with the kids. And petrol prices are so high, you can’t just drive around everywhere because it costs so much.”

It’s more those fuel costs that are the main issue for the fair across the park from Zippos Circus in Blackheath. It uses ordinary diesel to move from site to site, and then once stationary, about 10 liters of lower-taxed “red” diesel an hour to run its generators for up to nine hours a day. Those costs have risen to 40% from 30% of the fair’s total expenses.

Funfairs were shut for 16 months during the pandemic so the showmen had been hoping for a bumper season this summer. The financial pressures are getting unbearable for many, according to Joe Noyce, a regional treasurer at the Showmen’s Guild of Great Britain, a trade association for the travelling fairground industry.

Noyce’s organization, which has more than 2,000 members in charge of rides, attractions and bouncy castles, has received reports of some younger showmen taking their own lives because they were unable to travel and make a living. Others are turning to more lucrative occupations such as helping fill the shortage of truck drivers, he said.