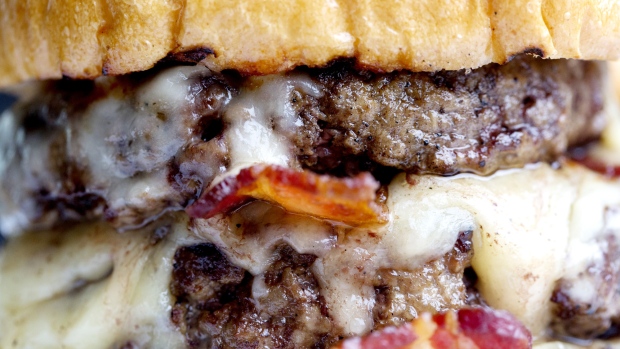 A hamburger sits on a table in an arranged photograph. , Bloomberg

Creating designer protein that can make your veggie burger taste like the real thing is as easy as brewing beer. Or at least that’s what a new subsidiary of Boston-based bio-manufacturing startup, Ginkgo Bioworks Inc., says.

The goal at Ginkgo is to get alternative products to market faster, chief executive officer Jason Kelly said in an interview. In a statement announcing the funding, the company likened making alternative foods to the beer-brewing process, because vital ingredients such as vitamins, amino acids, enzymes, and flavors are made through fermentation with genetically engineered yeasts and bacteria. Eliminating extra time in the lab can streamline the process and make it go faster, Kelly said.

With increasing demand from so-called flexitarians -- mostly millennials who are more inclined to consider sustainability when consuming -- and more need for meat and protein than natural animal products can keep up with, there is no time to wait around, according to Kelly and Motif’s CEO Jonathan McIntyre.

“In 30 years’ time, there will be 2 billion more mouths to feed, and there will simply not be enough food to go around just using today’s methods," Judith Swales, head of Fonterra’s global consumer and food service business, said in a statement. "At the same time, we recognize consumers have different nutritional needs and preferences."

Retail sales of plant-based meat alternatives rose by almost 25 per cent to US$770 million in August 2018 from a year earlier, according to a report released this month by Rabobank International. Plant-based alternatives to other animal products, such as milk, cheese and yogurt, are estimated to fetch US$4.1 billion in sales.

“People seem to be warming to the idea of ‘Frankenfood’ more than ever," Nick Fereday, a Rabobank executive director, wrote in the report.

Kelly plans for Ginkgo Bioworks to focus on the scientific engineering, while Motif takes on branding and product development to supply ingredients. Motif aims to launch their products within the next 1-2 years.

“The ability to use technology to solve problems in the food industry is kind of coming to age again," McIntyre said.