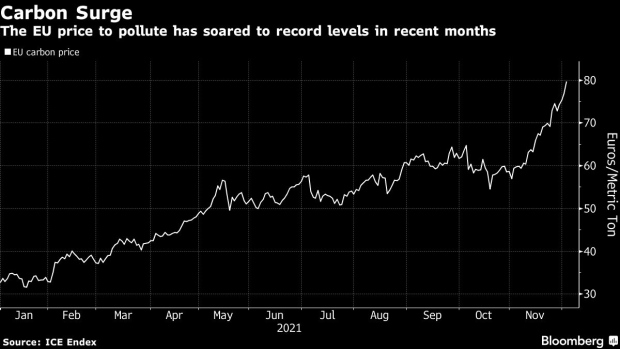 (Bloomberg) -- EU carbon permits are set to rise to more than 100 euros a ton this month as utilities that burned more coal this year account for their increased emissions, according to Per Lekander, managing partner at Clean Energy Transition LLP.

Lekander has been one of a handful of investors betting that the permits will rise rapidly as the European Union makes use of the market to help achieve its climate goals this decade. At the same time, natural gas prices have soared, pushing utilities to burn more coal and increasing demand for carbon allowances.

“Assuming gas doesn’t fall, and I don’t see why it will, carbon is going to go up very far, very quickly,” he said in a phone interview. “On my models it should be somewhere between 120 euros to 150 euros.”

Carbon permits gained as much as 4% Thursday to a fresh record of 79.87 euros per metric ton on ICE Endex. The emissions price surged earlier this year ahead of the release of the European Union’s so-called Fit for 55 package to accelerate pollution cuts by 2030. The price of an allowance has risen more than 140% this year, driven most recently by the use of coal.

“Carbon was too low, and the power sector was running up an allowance deficit because they were emitting a lot running coal very heavily, and not running gas,” Lekander said.

The rising price may put extra pressure on lawmakers to act. Lekander said that once carbon rises to 100 euros, politicians will likely do something to try and lower the price, even if it’s just to talk about taking action.