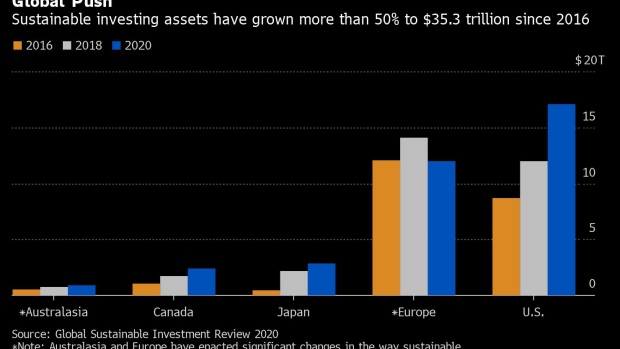 The U.S. Securities and Exchange Commission headquarters stands in Washington, D.C., U.S., on Thursday, Jan. 2, 2020. The federal appeals court in Manhattan today said the government may pursue insider-trading charges under a newer securities-fraud law not subject to a key requirement of the statute prosecutors traditionally use. , Bloomberg

(Bloomberg) -- U.S. regulators have long said they’re dubious about the green and socially conscious labels that Wall Street applies to $35 trillion in so-called sustainable assets. Now, the watchdogs are hunting for proof that they’re right.

For several months, Securities and Exchange Commission examiners have been demanding that money managers explain the standards they use for classifying funds as environmental, social and governance-focused, said people familiar with the matter. The review is the SEC’s second into possible ESG mislabeling since last year -- showing the issue is a priority for the agency and a reason for the industry to worry about a rash of enforcement actions.

“It is a real area of scrutiny, particularly as it relates to disclosures,” said Morgan Miller, a partner at law firm Paul Hastings in Washington and a former SEC enforcement attorney.

The SEC is following the money: Few businesses are booming in high finance like sustainable investing, as governments, pension plans and corporations all seek to lower their carbon footprints and be better public citizens. Amid the rush for dollars, more and more ESG insiders have started sounding alarms that a lot of the marketing is hype, a term known in the industry as greenwashing.

For instance, German and U.S. authorities, including the SEC, launched investigations into Deutsche Bank AG’s asset-management arm DWS Group after a former senior executive alleged the firm exaggerated the environmental credentials of some investment products. While DWS rejected the claims, its shares slid the most in almost 18 months last week on news of the probes.

The selloff was a warning to other fund managers of what’s at stake if they end up in regulators’ crosshairs. Some European firms responded by checking whether they might have to reclassify assets and setting up internal teams to review ESG products.

Letters that the SEC sent out earlier this year point to some of the agency’s top concerns, said the people who asked not to be named because the correspondence isn’t public.

Investment advisers were asked to describe in painstaking detail the screening processes they use to ensure assets are worthy of ESG designations, one of the people said. The SEC also wants to know how firms are grappling with different jurisdictions’ requirements. For instance, Europe has specific standards that money managers must adhere to in making sure assets are green or sustainable. But in the U.S., it’s much murkier.

Another SEC query sought information about ESG compliance programs, policies and procedures, a different person said. The SEC additionally asked about statements made by managers in their marketing materials or regulatory filings.

The review is being conducted by the SEC examinations division, whose findings can trigger policy changes. If it spots signs of misconduct -- like that fund managers are misleading customers -- it would typically alert the SEC’s enforcement unit for further investigation and potential fines.

Climate change and social issues like boosting workforce diversity are high priorities for the Biden administration, and SEC Chair Gary Gensler has talked often about the regulator’s focus on ESG.

Appearing before the European Parliament this week, he reiterated that the SEC may force fund managers to reveal the criteria and data they use to market themselves as environmentally and socially conscious. The agency is also working on a rule that would make public companies disclose how a warming planet could impact profits.

“Funds that say they’re sustainable and green and the like -– what stands beneath that right now?” Gensler told European Union lawmakers Wednesday. “It could be appropriate to say you’ve got to say an awful lot more.”

In April, the SEC released a report laying out the findings of an earlier agency examination that found many funds describing themselves as ESG weren’t doing enough to ensure that their marketing rang true. Certain mischaracterizations were so bad that the regulator signaled some firms could be violating securities laws.

The fund industry has said one problem is that no one really agrees on what qualifies as sustainable investing. Since March, European money managers have had to disclose the actual ESG features of products being touted. In the U.S., no such mandate exists -- prompting confusion among financial firms and investors alike.

“Given the squishiness of what it means to be an ESG investor, I’m suspecting they’re going to find some interesting things,” Phillip Gillespie, a senior counsel at WilmerHale in Boston, said of the SEC.

Still, any murkiness over rules and requirements isn’t insulating firms from criticism.

InfluenceMap, a London-based nonprofit, said last week that more than half of climate-themed investment vehicles aren’t living up to the goals of the Paris Agreement. The group said it found shortcomings at funds managed by UBS Group AG, State Street Corp. and BlackRock Inc.

UBS said InfluenceMap didn’t capture the benefits of certain investments because its study focused on a limited number of sectors. State Street said it offers a range of ESG investments, including some aligned with the Paris Agreement. BlackRock said there were gaps in InfluenceMap’s assessment, such as its failure to include the asset manager’s Paris-aligned climate exchange traded funds in the study.