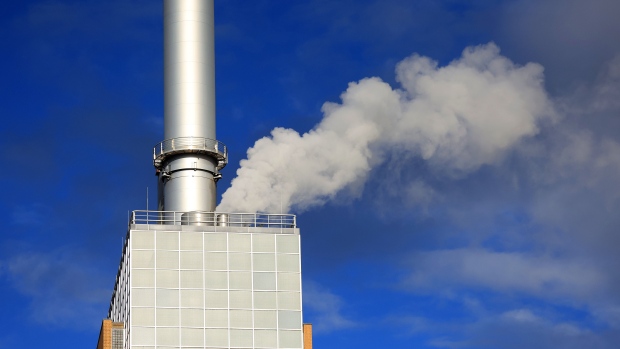 One of the towers of the Linden gas-fired combined heat and power plant, also known as the 'Three Warm Brothers', in Hanover, Germany, on Tuesday, Sept. 20, 2022. The German government released another 2.5 billion euros ($2.5 billion) of credit lines to secure gas supplies, as it writes off Russia as a reliable energy supplier. Photographer: Krisztian Bocsi/Bloomberg , Bloomberg

(Bloomberg) -- Most asset managers that promised to eliminate their financed emissions by 2050 have failed to submit plausible plans toward achieving that goal, according to a fresh analysis of the process.

“Pledges submitted to the Net Zero Asset Managers Initiative (NZAMI) are inadequate, and only commit most members to reduce a small percentage of greenhouse gas emissions,” environmental think tank Universal Owner said in a report published Tuesday. Overall, the target-setting “process is irrevocably flawed and fails to commit asset manages to act on emissions,” it said.

The conclusion raises more questions for the Glasgow Financial Alliance for Net Zero, the umbrella organization that houses NZAMI and other net-zero groups. GFANZ, which numbers more than 500 members representing roughly $135 trillion in assets, is struggling to balance efforts to keep signatories on board while enforcing credible targets. Its sub-alliance for banks last month had to tone down some requirements in order to stave off high-profile defections.

In an interview earlier this year marking the one-year anniversary of GFANZ, co-Chair Mark Carney warned against taking too critical a stance toward the finance industry as members work toward meeting the alliance’s goals. The first step was to secure finance industry commitments, he said. He characterized the next step as “plumbing work,” whereby the goal is to “operationalize those commitments into net-zero plans and transition plans,” which he said was still under way.

Universal Owner said that part of the reason asset managers were failing to provide credible paths to net zero lies in the application of methodologies, namely the Paris Aligned Investment Initiative (PAII) and the Science Based Targets initiative (SBTi).

The research shows that “the whole target-setting process is inconsistent, confusing and flawed in terms of actually committing asset managers to defined action on climate change.”

A spokesman for NZAMI said the initiative has grown rapidly in its less than two-year life and the target-setting methodologies that members use have been built from the ground up in a short period. The group’s objective “is about raising ambition on net zero at scale and providing greater transparency; on both accounts this is being achieved,” he said. Still, “there is always more to be done, including solving some of the more complex issues and remaining barriers that investors face.”

GFANZ is co-chaired by Carney and Michael Bloomberg, the founder of Bloomberg News parent Bloomberg LP.

Universal Owner looked at portfolio emissions and transition plan goals lodged in May by 43 asset managers and identified “key flaws” in their targets. These include the failure of asset managers to control whether portfolio companies’ net-zero plans are “valid.” The nonprofit also found that asset managers are applying net-zero objectives to a smaller share of their portfolios than the market average, and that members are using calculations that may vastly overstate the proportion of their asset under management actually incorporated in net-zero targets.

BlackRock, for example, sidesteps “setting a binding target, merely expressing what it ‘anticipates’,” Universal Owner said. The nonprofit described State Street’s target as being “so ambiguous that it’s virtually impossible to establish what it has committed to” and Vanguard “doesn’t explain what a ‘net- zero glidepath’ is, or how it will evaluate whether companies are following it.”

A spokesman for BlackRock said the money it manages isn’t its own and the firm’s role in the energy transition is as a fiduciary to its clients. “Our role is to help them navigate investment risks and opportunities, not to engineer a specific decarbonization outcome in the real economy,” he said.

Spokespeople for Vanguard and State Street declined to comment.