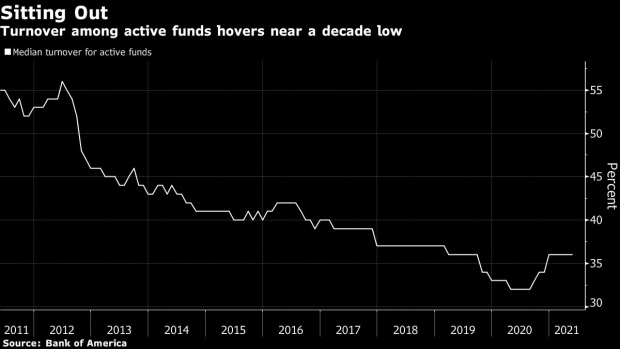 (Bloomberg) -- Covid-19 upended almost everything, including the trajectory of the U.S. economy, which sank into one of the worst recessions in history and then rebounded into the fastest expansion in decades.

Active fund managers still favor stable growth stocks over cheap ones and are avoiding economically sensitive shares like banks and energy, just as they did during the market’s tumble in March 2020. Except for a growing aversion to industrial firms, managers’ preferences across sectors are almost identical to what they were almost 16 months ago, data compiled by Bank of America Corp. show. In fact, almost three-quarters of the same beloved stocks remain in their portfolios.

“It’s mystifying how much the world has changed in the year, but how little the average portfolio has changed,” Savita Subramanian, BofA’s head of U.S. equity and quantitative strategy, said by phone. “My sense is that the buy side looked at the last 10 plus years and thought to themselves, ‘yes, the economy is recovering off the bottom from the exogenous shock of the health scare, but we’re not necessarily off to the races.’”

A case can be made that few traders see the spread of Covid-19 as a permanent game changer. Some have called the pandemic just an interruption in a prolonged regime of subdued growth. If anything, they say, the shutdowns accelerated trends already in place, like the shift toward automation and online spending. This would explain the continued affection for internet and software shares.

Earlier this year, hedge funds -- those that make both bullish and bearish equity bets -- boosted their exposure to cyclical shares that benefit from an economic expansion, but have pared those bets more recently. As a result, their cyclical positioning fell toward levels seen in the aftermath of the pandemic crash.

At long-only funds, while their relative cyclical exposure has risen to 17% from 11% in March 2020, it represents a bullish tilt that BofA calls “minimal.”

The cautious stance is understandable. Value stocks, a class dominated by cyclicals, trailed growth in 11 of the last 12 years. But recency bias can be dangerous.

Marko Kolanovic, the chief global market strategist at JPMorgan Chase & Co. warned in May that money managers who have spent the bulk of their careers profiting from deflationary trends need to quickly switch gears or risk an “inflation shock” to their portfolios.

“Many managers are probably still waiting for definite proof that the next decade’s growth could be more cyclical,” Caputo said. “The risk for many investors is that they may be caught flat-footed.”

Theoretically, this should be a good time for stock picking, with the pandemic revealing strong and weak companies. Yet fund managers largely stood still. Their median turnover, or the proportion of shares bought and sold as a percentage of their assets, last year fell to a decade low and has stayed below 40%. For context, turnover peaked at 56% in 2012, according to BofA data.

One possible reason for hesitancy is that Covid isn’t finished. While the economy is roaring back, buttressed by unprecedented stimulus, the spread of a coronavirus variant is clouding the outlook. The uncertainty has prompted frequent, violent stock rotations.

Timing these rotations isn’t easy and getting it wrong can be hazardous. Consider technology, an industry that was the market darling during the initial stage of the pandemic. It lost some luster as vaccines were rolled out, but now is back in favor amid a growth scare punctuated by a drop in 10-year Treasury yields.

Along the way, tech shares as a group, have beaten the S&P 500 by 20 percentage points. But missing the 10 best relative days -- most of which occurred in the second half of last year -- would have led to an underperformance of 6 percentage points.

The reluctance to shuffle stock holdings may also reflect some trepidation to part from the crowd, according to Matt Tuttle, chief executive officer at Tuttle Capital Management LLC.

“From a career risk standpoint, if you’re with what everybody else is doing, you can always say, ‘look, we stunk. But so did everybody else,’” Tuttle said. “There are very few people who are willing to go out on a limb, so you see everyone doing the same thing.”