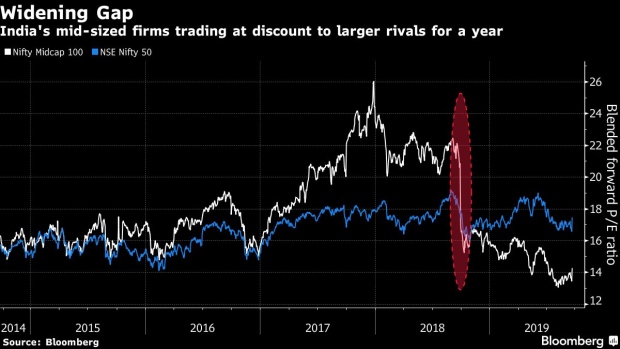 Pedestrians walk past the Bombay Stock Exchange (BSE) building in Mumbai, India, on Thursday, May 23, 2019. Indian Prime Minister Narendra Modi is set to win a majority on his own in India’s general election, with his Bharatiya Janata Party surging to a commanding lead in early vote counting. Photographer: Dhiraj Singh/Bloomberg , Bloomberg

(Bloomberg) -- Kotak Mahindra Asset Management Co. has loaded up on shares of Indian mid- and small-sized businesses based on its primary investment rule to pick stocks rather than try to time the market.

It’s been a volatile year for Indian stocks, however, with the Sensex’s 12% climb through early June nearly wiped out as of Thursday’s close. The benchmark gauge surged 5.3% Friday after the country cut its corporate tax rate, putting it back in the green for the year.

“For investors it’s very difficult to time market phases,” Harsha Upadhyaya, chief investment officer-equity at India’s sixth-largest fund manager, said in an interview at his office in Mumbai last week. “If you can take a little bit of more risk, you should tilt toward mid- and small-cap as this basket can give higher returns when the market stabilizes.”

India’s smaller stocks have been hit by a slowing economy and a severe dent in consumption. The Nifty Midcap 100 Index has slumped 25% from its peak in January 2018 and now trades 14.3 times its estimated 12-month earnings, lower than the Nifty 50 Index’s 17.5 times.

Kotak sees this as a good opportunity to enter this segment of the market, as it expects Indian lenders to pass interest-rate reductions by the central bank to their customers. “If it happens, it will improve consumer and corporate demand, and that will be one of the bigger triggers,” Upadhyaya said.

The money manager prefers non-consumer companies and will continue to add shares of businesses such as industrial-equipment suppliers, chemicals, cement and gas utilities. Consumer stocks constitute nearly 12% of its holdings, according to data compiled by Bloomberg as of Aug. 31.

About 40% of the firm’s holdings are financial stocks. Around 55% of its stock holdings are larger companies, while mid- and small-sized names constitute a total 39%.

Kotak Standard Multicap Fund, the company’s biggest fund with about $3.6 billion of assets, has returned an average of about 11% over the past five years, topping 82% of its rivals, according to Bloomberg data. That compares with a 7.4% annual return generated by the Nifty 200 over the same period.

Here are some more comments from Upadhyaya:

To contact the editors responsible for this story: Lianting Tu at ltu4@bloomberg.net, Kurt Schussler, Jeanette Rodrigues