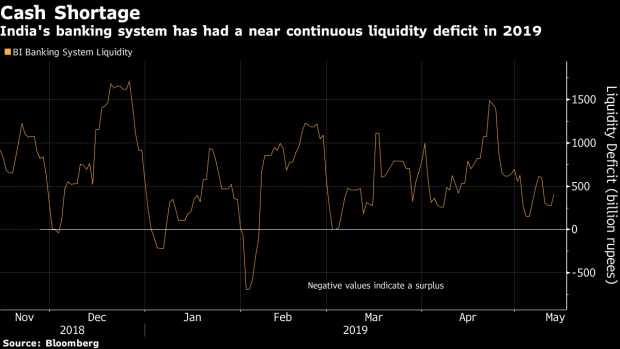 (Bloomberg) -- India needs to pump more cash into its financial system to prevent a worsening of the funding crisis among shadow banks and the corporate sector, according to one of the nation’s biggest money managers.

Non-banking financial companies had served as a “surrogate womb” for banks, who face regulatory limits on how much they can lend, but that “surrogacy has stopped,’’ Lakshmi Iyer, chief investment officer for debt at Kotak Mahindra Asset Management Co., said in an interview at her office in Mumbai. “If the liquidity the system requires is not provided sooner or later, this could morph itself into something beyond NBFCs.’’

The non-bank lenders, which have been hit by high borrowing costs and largely shut out from the bond market after the crisis at shadow lender IL&FS Group broke out last year, are facing the risk that more borrowers will be unable to repay their debt as the cash crunch drags on. Oil industry firms, steel producers and mineral companies, all of which rely on NBFCs for funding, are finding it difficult to raise money, Iyer said.

Muted government spending and high election-linked expenditure have created a cash deficit in India’s banking system in the past few months. Authorities are already using open-market debt purchase operations and currency swaps as a “potent liquidity tool,” but more is needed to get enough cash into the system, Iyer said.

India’s cash deficit, measured by how much lenders need to borrow from the central bank to carry out their operations, is the worst since 2016, according to data compiled by Bloomberg. The banking system has experienced a liquidity deficit for all but 10 days so far in 2019, the data show.

Policy makers appear to be aware of the potential risks. The nation’s top bureaucrat for corporate affairs, Injeti Srinivas, warned of an imminent crisis in NBFCs due to over-leveraging and a credit squeeze among other reasons, and those are “a perfect recipe for disaster,” the Press Trust of India reported.

The troubles have hit borrowers reliant on non-bank lenders for financing, such as property developers. In an industry group letter to India’s finance minister, real estate companies complained that some lenders are delaying loan disbursals and raising interest rates arbitrarily.

There were 10,190 NBFCs operating as of September 2018, and their outstanding loans came to about 20 trillion rupees ($285 billion), according to the Reserve Bank of India. That’s around a fifth of the balance sheet of all the nation’s banks.

Iyer thinks there will be consolidation in the sector in the next two to three quarters.

In the meantime, investors should try not to act too much on rumors in a volatile market, as “when that small matchstick will become a forest fire, we don’t know,’’ she said. “The last thing that we want right now is a forest fire.’’

To contact the editors responsible for this story: Andrew Monahan at amonahan@bloomberg.net, Ken McCallum