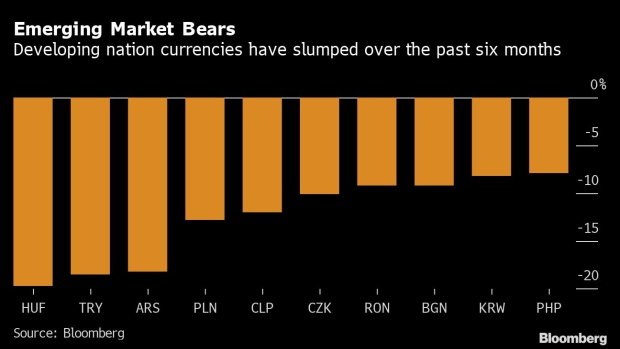 (Bloomberg) -- Emerging-market currencies are tumbling as the twin threats of rising US interest rates and a global recession send traders scurrying to the safety of the dollar.

The MSCI Emerging Markets Currency Index dropped for a second day, extending this year’s slide to 4.4%, heading for the steepest annual drop since 2015. The Philippine peso led declines in Asian trade, sliding to the lowest level in 17 years, while the South Korean won tumbled to the weakest since 2009.

The losses in Asia followed those in other EM regions Tuesday -- when a surge in the greenback saw the Colombian peso slump as much as 2% to a record and the Russian ruble drop the most in four months.

“Emerging markets will suffer in the current environment of either higher developed-market rates or weaker global growth,” Win Thin, global head of currency strategy at Brown Brothers Harriman & Co. in New York, wrote in a research note. “No matter how things turn out, it’s bad for EM.”

Read More: Every Emerging Currency Slumps Amid a Stronger Dollar

All of the 23 major emerging-market currencies tracked by Bloomberg have weakened over the past month as the Federal Reserve has raised its benchmark rate by a combined 125 basis points at its latest two meetings. Chair Jerome Powell has said the central bank may hike by either 50 basis points or 75 basis points at its July gathering.

“The environment is not very forgiving for EMs,” said Eugenia Victorino, head of Asia strategy at Skandinaviska Enskilda Banken AB in Singapore. “An improvement in global growth outlook will be required to turn the sentiment on the dollar, which may only come next year.