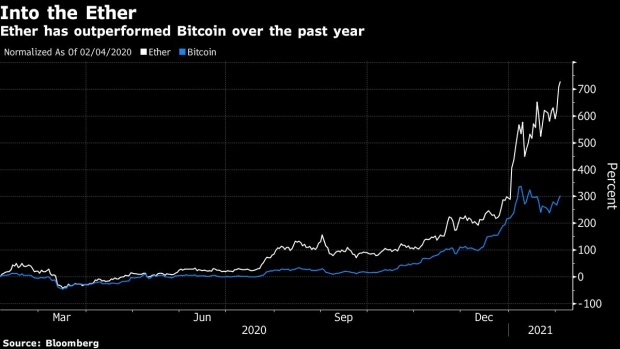 (Bloomberg) -- An eightfold rally in Ether over the past year to a record faces possible turbulence from the impending launch of CME Group Inc. futures for the largest cryptocurrency after Bitcoin.

The contracts set to debut from Feb. 8 evoke memories of 2017, when the start of Bitcoin futures coincided with a peak in the leading digital asset ahead of a spectacular bust. A Federal Reserve Bank of San Francisco analysis posits the derivatives opened the door for bearish investors.

Ether so far is unruffled. It climbed to an all-time high of about $1,563 Wednesday and has trounced Bitcoin’s 26% advance in 2021. The token is popular for so-called decentralized finance, which skirts traditional intermediaries such as banks. As ever with digital coins, speculators may also be trying to ride Ether’s momentum for quick gains.

Ether may not suffer the same fate as Bitcoin back in 2017, said Vijay Ayyar, head of Asia Pacific with crypto exchange Luno in Singapore.

“For all you know, major players may be looking to get long exposure through futures, now that there is an institutional-grade product to do so,” he said. “Smart traders moved to Ether when Bitcoin topped out around $40,000 and have made more money.”

In the background, Ether could also be affected by progress toward an upgrade of the affiliated Ethereum blockchain so it can process more transactions. The way the upgrade is done may curb supply of the tokens.

In the Federal Reserve Bank of San Francisco analysis from 2018, authors including Galina Hale and Arvind Krishnamurthy wrote that the rapid run-up and subsequent fall in Bitcoin after the introduction of futures “does not appear to be a coincidence,” adding that the contracts “allowed pessimists to enter the market, which contributed to the reversal of the Bitcoin price dynamics.”

The climb in prices and growing profile of cryptocurrencies remain controversial. Some warn digital coins are prone to mania and that investors can lose everything. Others sense a maturing asset class attracting long-term investors seeking to hedge a variety of risks.

Ether futures are expected next week pending regulatory approval, according to the CME, which also offers Bitcoin futures and options.