Bitcoin’s recent bounce has yet to dispel doubts about its vulnerability following a rout in May.

The cryptocurrency has jumped about 14 per cent over two days and was trading at US$38,295 as of 11:05 a.m. in London on Thursday. While the momentum may cheer bulls, a JPMorgan Chase & Co. team said backwardation in a part of the futures market -- where the spot price is above futures prices -- is reason for caution.

“We believe that the return to backwardation in recent weeks has been a negative signal pointing to a bear market,” JPMorgan strategists led by Nikolaos Panigirtzoglou wrote in a note. They added that Bitcoin’s relatively depressed share of total crypto market value is another concerning trend.

The JPMorgan analysis is based on the 21-day rolling average of the 2nd Bitcoin futures spread over spot prices, and pointed out the Bitcoin futures curve was in backwardation for most of 2018. That year, the cryptocurrency fell 74 per cent after a boom. Backwardation is an “unusual development and a reflection of how weak Bitcoin demand is at the moment from institutional investors” who tend use contracts listed on the Chicago Mercantile Exchange, according to the report. 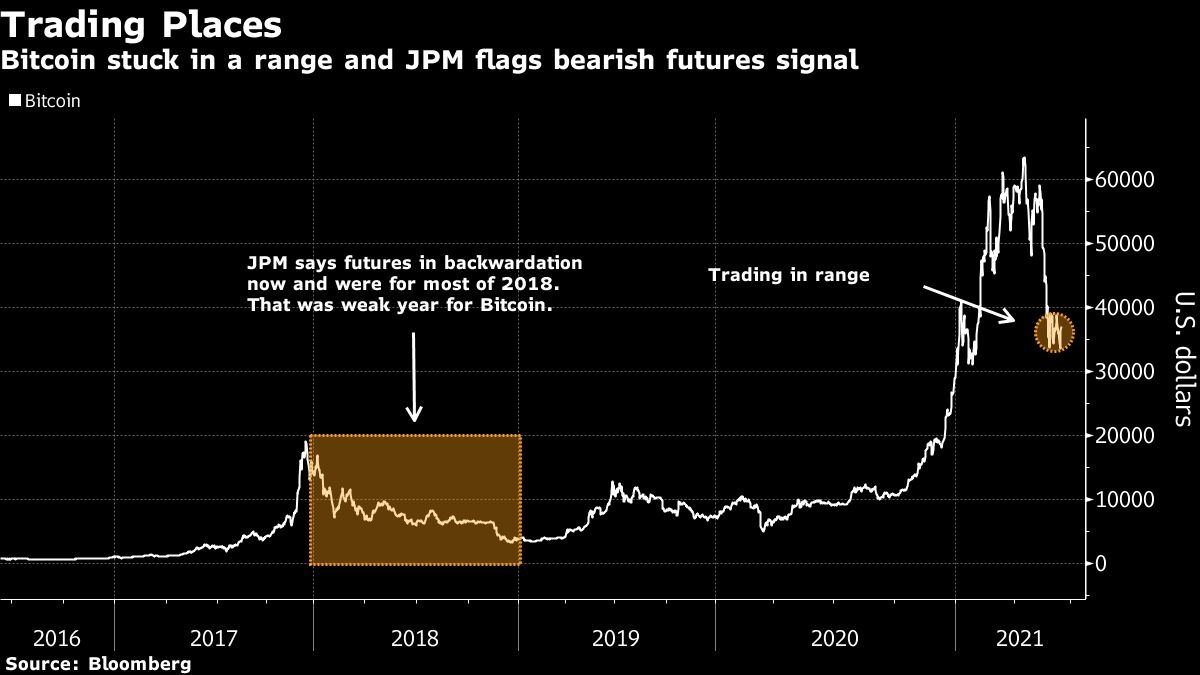 The cryptocurrency’s share of overall crypto market value is about 42 per cent currently, down from roughly 70 per cent at the start of the year, according to data from tracker CoinGecko. For some analysts, that’s in part a sign of retail-driven investor froth lifting other coins.

Bitcoin’s share may need to top 50 per cent to make it easier to argue the current bear market is over, the JPMorgan strategists said in the June 9 report. Panigirtzoglou previously flagged Bitcoin’s declining market share in early May, ahead of tumble in the coin’s price.

Traders are waiting for the next catalyst to break Bitcoin from a US$30,000 to US$40,000 range that’s been in place since a decline from a record of almost US$65,000 in April. Public criticism of the digital currency’s energy needs by tycoon Elon Musk and a Chinese regulatory crackdown are among obstacles. Bulls got a bit of a lift Wednesday after El Salvador made Bitcoin legal tender.

“We will need to see a break here for the bulls to feel we’re out of this period of vulnerability,” Chris Weston, head of research with Pepperstone Financial Pty, wrote in a note Thursday.