No surprise markets are choppy at this time: Starlight Capital's Dennis Mitchell

Another raft of blockbuster corporate profits pushed stocks to a record at the end of a week that started with concern about a peak in earnings and a coronavirus resurgence.

About 87 per cent of the S&P 500 companies reporting results so far this season have beaten Wall Street estimates, according to data compiled by Bloomberg. Twitter Inc. and Snap Inc. led a rally in social-media firms as sales blew past forecasts, while American Express Co. jumped after adding a record number of new customers to its tony Platinum card in the second quarter.

After this week’s gains in equities, the S&P 500 is now up 97 per cent from the depths of the pandemic. Though the rapid spread of the delta variant has sown volatility, several investors are betting that a robust economic recovery will fuel corporate America -- even with threat of higher inflation. For Evercore ISI’s Chairman Ed Hyman, retailers have more power than ever to pass on higher prices to consumers, and that will spur earnings growth in the quarters ahead.

“Earnings are reflecting an incredible snapback in economic activity,” said Jeffrey Kleintop, chief global investment strategist at Charles Schwab & Co. “Concerns that stocks are overvalued are less potent here in terms of a threat to the market simply because earnings are rising at fast clip.” 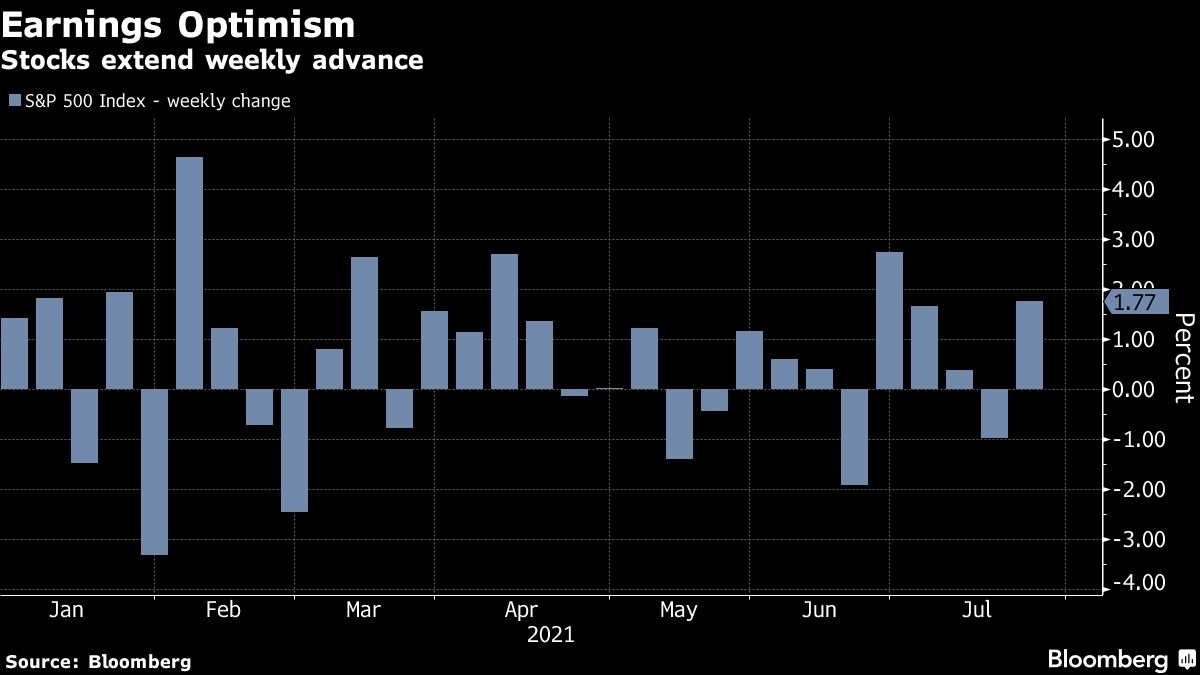 For Angelo Kourkafas, investment strategist at Edward Jones, the strong start of the second-quarter earnings season has allowed investors to look through the uncertainties. The “buy-the-dip mentality is alive and well,” he added.

Some of the biggest Chinese firms listed in the U.S. slumped as concerns surrounding further regulatory scrutiny deepened. The Nasdaq Golden Dragon China Index had its longest stretch of weekly losses since May 2019, while ride-hailing giant Didi Global Inc. tumbled.