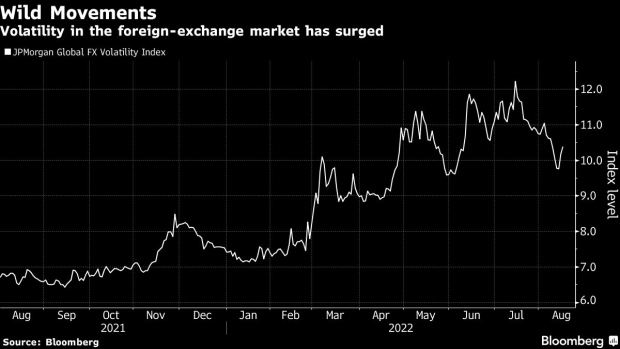 A customer outside the Ninja Money Exchange, operated by Interbank HD, in the Shinjuku district of Tokyo, Japan, on Thursday, June 9, 2022. Caught in the crossfire between the two wildly different monetary policy regimes in Tokyo and Washington, at one point Tuesday, the Japanese currency was less than one yen away from its 2002 high of 135.15 per dollar. , Bloomberg

(Bloomberg) -- The amount of foreign-exchange transactions has leaped over the past year amid a surge in market volatility that’s been fueled by increased geopolitical turbulence and big shifts in monetary policy as central banks around the world battle to contain inflation.

Average daily trading volumes in July jumped around 8% from a year earlier, according to figures from CLSMarketData, an FX data and analytics service. The average daily volume of transactions submitted to CLS was around $1.879 trillion. That’s up from $1.745 trillion in July 2021, although below the June 2022 number of $1.98 trillion. Volumes in forwards helped drive the annual advance, rising 66% year-on-year, while the amount conducted in spot rose 12% and swaps were up 2%.

The busy trading comes as currency markets have been rocked by a medley of influences this year ranging from the ongoing war in Ukraine and energy shortages to Federal Reserve interest-rate hikes and Covid-related lockdowns in China. The dollar surged over that period as traders piled into the world’s reserve currency, with a Bloomberg gauge of the greenback climbing more than 11% in the 12 months through July. At the same time, major peers like the euro and the yen have fallen to levels unseen in several decades against the US currency.

The pickup in activity has been accompanied by a blowout in implied FX market volatility. A JPMorgan volatility gauge based on options has surged above 10, and at one point in July topped 12, having been down below 7 around a year ago.

“With monetary policy heating up around the world, especially in developed markets, you have lots of movement in both interest rates (rate volatility has been extraordinarily high) and currencies,” said John Velis, FX strategist at Bank of New York Mellon Corp. “Generally, higher currency volatility in the crosses does lead to stronger dollar behavior.”

That very turbulence within markets is a big factor in helping the dollar, which often acts as a haven, to remain strong. It’s also providing traders with opportunities to make money. After getting thrashed in the era of low interest rates, the last remaining hedge funds dedicated to the world of FX are in fighting spirits this year, with several indexes indicating that these kinds of managers are on track to notch their best year since 2003.