The strong US dollar is changing competitive landscape: Head of equity strategy

For foreign-exchange traders leery of taking a firm position on the mercurial US dollar right now, Canada’s currency is providing fertile ground for potential wagers.

The greenback has climbed against all of its Group-of-10 counterparts this year, but the drivers of its gains have alternated between good and bad news for the global economy: At times it’s been buoyed by higher Treasury yields and expectations of tighter Federal Reserve policy, while at others its haven qualities have seen it rise.

Against that backdrop, the Canadian dollar has shown itself to be the most resilient of all the other major developed currencies. It’s up close to 3 per cent  against the Australian dollar, another commodity-linked currency and the next-best performer in the G-10. And various strategists reckon that the loonie, as some refer to Canada’s currency, is still relatively undervalued and primed to keep outperforming.

The Canadian dollar “offers a resilient economy, a hawkish central bank and positive terms of trade,” said Scotiabank’s Chief Foreign-Exchange strategist Shaun Osborne, who contrasted that with situations in the euro-area, UK and Japan that are far less supportive for currencies. 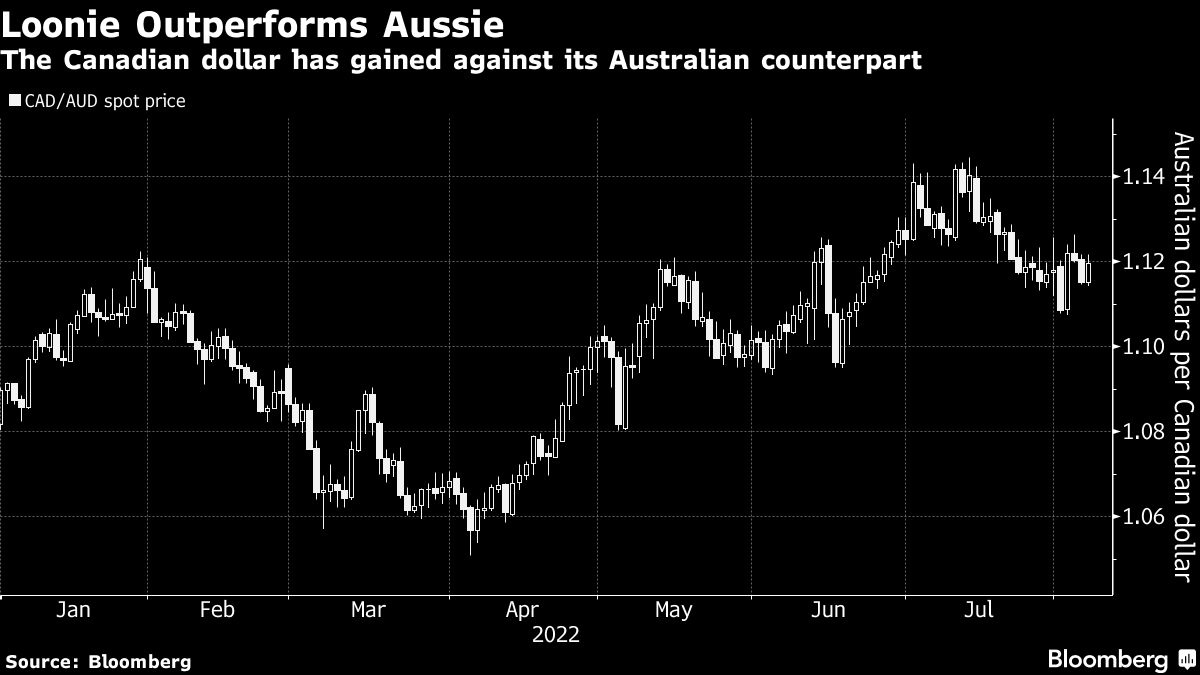 The recent pullback in resource prices that’s dragged the Bloomberg Commodity Index down more than 13 per cent  from its peak has of course hurt the Canadian currency, but it has nonetheless held up relatively well versus other non-dollar peers like the euro and the yen.

For Greg Anderson, New York-based global head of foreign-exchange strategy at BMO Capital Markets, there is “good upside potential” for the Canadian dollar against the Japanese currency.

Canada’s central bank is expected to lift its benchmark rate by another half a percentage point at its next policy meeting on Sept. 7, taking it to 3 per cent , based on current forecasts by economists. Markets, meanwhile, suggest that the Ottawa-based central bank  -- like its counterpart in Washington -- might even opt for something bigger to combat seemingly relentless inflation pressures. In contrast, rate traders are less-than-fully-pricing half point moves by the Australian and European central banks at their next gatherings, while the Bank of Japan’s easy stance remains entrenched.

Monex Europe’s Simon Harvey reckons that wagering on the loonie against commodity-linked peers such as the Australian or New Zealand dollars is attractive. Canada is less directly linked to China than the South Pacific economies and more closely correlated with the picture on the US, meaning it may be relatively more shielded from a potential slowdown there as Asia’s biggest economy continues to battle COVID-19 flareups.

“Canada has a trade link to the US, sharing inflation dynamics with the US,” he said. “From a rate differential against the stronger dollar backdrop, CAD should outperform other commodity currencies.”