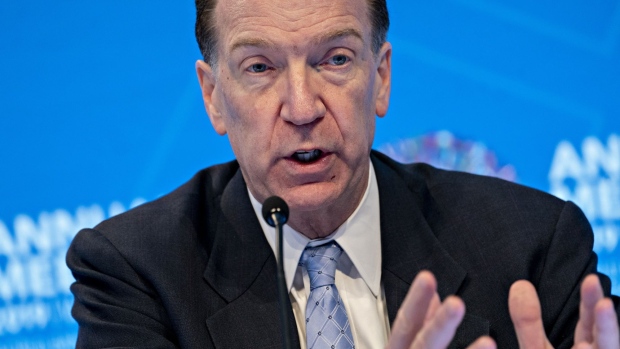 David Malpass, president of the World Bank Group, speaks at a news conference during the annual meetings of the International Monetary Fund (IMF) and World Bank Group in Washington, D.C., U.S., on Thursday, Oct. 17, 2019. The IMF made a fifth-straight cut to its 2019 global growth forecast, citing a broad deceleration across the world's largest economies as trade tensions undermine the expansion. , Bloomberg

(Bloomberg) -- Finance ministers from the Group of 20 nations are supportive of an extension of debt relief for the world’s poorest nations through to the end of the year, World Bank President David Malpass said.

“I’m pleased that the G-20 is endorsing the extension,” he said in an interview with Alix Steel and Guy Johnson on Bloomberg Television Wednesday. The G-20, which met this morning, is also urging private-sector creditors to participate, he said.

The G-20’s Debt Service Suspension Initiative, which took effect last May, delivered $5 billion in relief for more than 40 countries in 2020, according to the World Bank. The G-20 last October extended the program, originally set to expire in December 2020, through June, and agreed to consider a further six-month extension later.