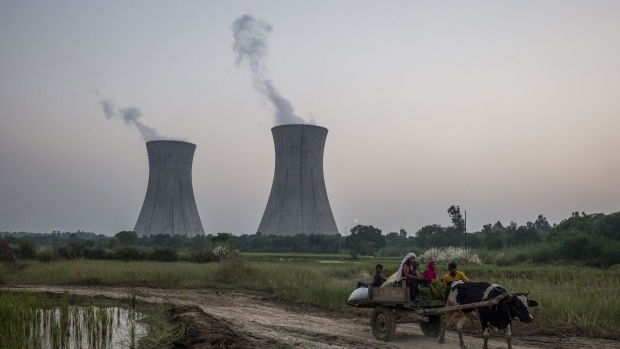 A cattle-pulled cart passes the central chimneys of the coal-fired NTPC Ltd. Dadri Power Plant in Gautam Budh Nagar district, Uttar Pradesh, India, on Thursday, Oct. 7, 2021. India, which relies on coal for about 70% of electricity generation, has already seen signs of power shortages, and needs to lift deliveries to avert the risk of blackouts. Photographer: Anindito Mukherjee/Bloomberg , Bloomberg

(Bloomberg) -- Leaders of the Group of 20 wealthy economies are preparing to pledge to stop funding foreign coal-fired plants, but are still wrangling over climate objectives and timelines that are crucial to keeping global temperatures in check, according to a draft statement for this weekend’s summit seen by Bloomberg.

The 11-page document, which is still being negotiated by diplomats in Rome ahead of the meeting, shows key deliverables have yet to be agreed. The draft, dated Thursday, refers to the “existential challenge” of climate change.

Many references to climate objectives and dates are still in brackets or with large slabs of text highlighted in various colors, meaning they have yet to be agreed. That includes a vow to take “immediate action” to keep the objective of limiting global warming to 1.5 degrees Celsius within reach.

Some sort of agreement among G-20 leaders is essential as many of them then go onto Glasgow for the COP26 climate summit, which is designed to improve on the goals set under the Paris climate accord.

This refers to country investment, not just the International Monetary Fund, according to a G-20 official who asked not to be identified speaking about confidential talks.

On domestic coal, the draft only pledges that leaders “will do our utmost to avoid building new unabated coal power generation capacity, taking national circumstances into account.”

The document suggests countries could agree to “differentiated responsibilities” depending on their “respective capabilities”.

G-20 nations say they “remain committed” to the Paris Agreement of holding the global average temperature increase well below 2 degrees Celsius and to pursue efforts to limit it to 1.5 degrees above pre-industrial levels. They acknowledge “the key relevance of achieving global net zero greenhouse gas emissions or carbon neutrality,” but the target date of 2050 is in brackets.

The draft also vows to “reduce our collective methane emissions substantially” but a reference to “by 2030” is also in brackets.

The section on achieving a yearly 100 billion-dollar target for climate financing for developing countries has yet to be detailed.

The negotiations are very slow, particularly on climate and energy issues, said another G-20 official.