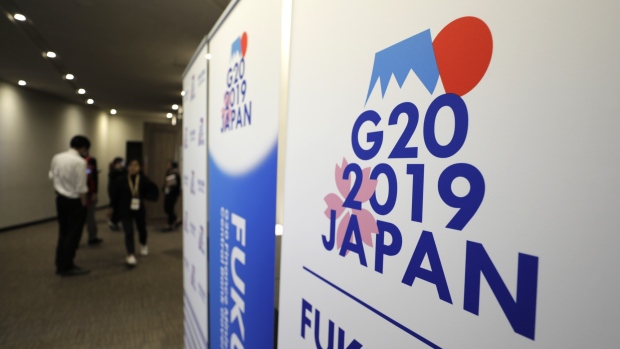 Banners for the Group of 20 (G-20) finance ministers and central bank governors meeting stand outside the media center of the meeting in Fukuoka, Japan, on Saturday, June 8, 2019. The challenges of raising tax from the digital economy was the focus of a session with finance ministers from China, France, Japan, Indonesia, Britain and the U.S. , Bloomberg

Finance chiefs from the Group of 20 gathering in Japan agreed to trim a passage in their joint statement referring to trade, cutting language that states a “pressing need” to resolve the tensions.

Instead, the communique will merely admit that tensions have escalated and refer to a consensus reached during a previous meeting in Buenos Aires to support international trade and investment, according to two officials familiar with details of the latest draft. The statement has yet to be published and details may still change.

The finance ministers and central bank governors of the world’s major economies are meeting in Fukuoka, Japan, this weekend amid an escalating global tariff war driven by U.S. President Donald Trump. A joint commitment to urgently resolve the trade war by the G-20 would run counter to the U.S. stance that higher tariffs are a legitimate tool to address what it sees as imbalances in its trade with China and other nations.

U.S. Treasury Secretary Steven Mnuchin was due to meet with Chinese central bank governor Yi Gang in Fukuoka, though expectations of a breakthrough this weekend are low. A better chance to restart negotiations that have been on hold since the U.S. ramped up tariffs on Chinese imports last month may come at the G-20 leaders’ summit later in June, where Trump and President Xi Jinping are due to meet.

In Fukuoka, finance officials from other nations continued to point out the risks to the global economy from the escalating tariff war, according to a third official briefed on the talks.