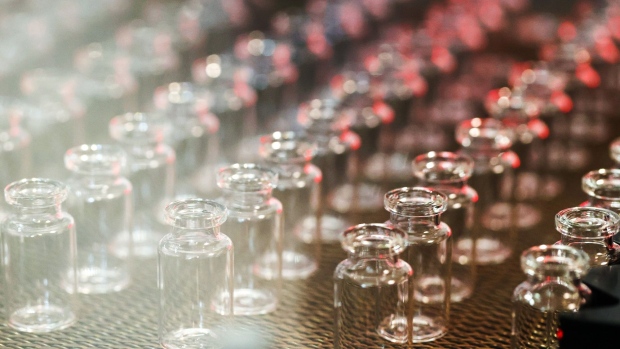 Glass vials move along a production line conveyor at the Gerresheimer AG medical glassware factory in Buende, Germany, on Tuesday, Aug. 11, 2020. Gerresheimer has built up capacity and most of its factories are operating around the clock as the company holds talks with pharma companies, working on a coronavirus vaccine. , Alex Kraus/Bloomberg

(Bloomberg) -- Leaders of the world’s biggest economies on Sunday will dedicate themselves to financing equal access to Covid-19 testing, treatments and vaccines, and will encourage bondholders to provide private relief to poor countries, according to a draft of their statement.

On medicines and vaccines, the Group of 20 will vow to “spare no effort to ensure their affordable and equitable access for all people, consistent with members’ commitments to incentivize innovation,” according to the draft obtained by Bloomberg News. “We recognize the role of extensive immunization as a global public good.”

The leaders will acknowledge a lack of participation by private creditors in the G-20 debt relief plan, known as the Debt Service Suspension Initiative, and will “strongly encourage” them to participate on comparable terms to official bilateral creditors, according to the draft. It also plans to encourage multilateral development banks to do more to support the initiative, which last month was extended through June.