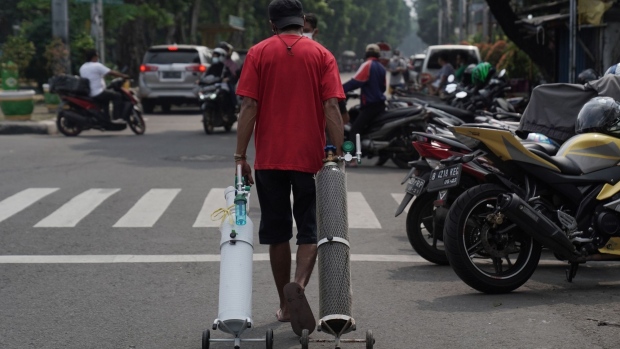 A man carries oxygen bottles after refilling them at a refill station in Jakarta, Indonesia, on Monday, July 5, 2021. Indonesia tightened entry requirements for travelers and ordered a ramp-up in oxygen production as the nation saw its worst day for Covid-19 deaths. , Bloomberg

(Bloomberg) -- Finance ministers and central bankers from the world’s biggest economies plan to warn of persistent risks to global growth from coronavirus variants even as the overall outlook brightens, according to a draft communique seen by Bloomberg News.

Since April, “the global outlook has further improved, mainly due to the rollout of vaccines and continued policy support,” according to a draft of the Group of 20’s statement, scheduled to be released Saturday in Venice, where policy makers are meeting. “However, the recovery is characterized by great divergences across and within countries and remains exposed to downside risks, in particular the spread of new variants of the Covid-19 virus and different paces of vaccination.”

The document, which may be subject to revision, indicates policy makers are far from ready to give the all-clear signal on the pandemic, with the delta variant causing a resurgence in Covid-19 cases in many nations. While the U.S. and Europe are enjoying strong recoveries as vaccinations spread, other places are lagging behind and suffering, such as India and South Africa.

The draft statement includes a pledge, similar to the group’s prior communique in April, “to use all available policy tools for as long as required to address the adverse consequences of Covid-19” and to avoid any “premature withdrawal of support measures.” It contains no explicit reference to the jump in U.S. inflation, other than a nod to central banks remaining consistent with mandates for price stability.

The G-20 is also set to endorse the global tax overhaul accord reached by 131 countries this month through the Organization for Economic Cooperation and Development. The draft statement calls for nations to address remaining details and come up with an implementation plan by October.

Finance ministers will also express support for the International Monetary Fund’s plan to create $650 billion of new reserves while calling on the fund to “quickly present actionable options” for wealthier nations to direct their portion of the funds to needier countries, according to the draft communique.