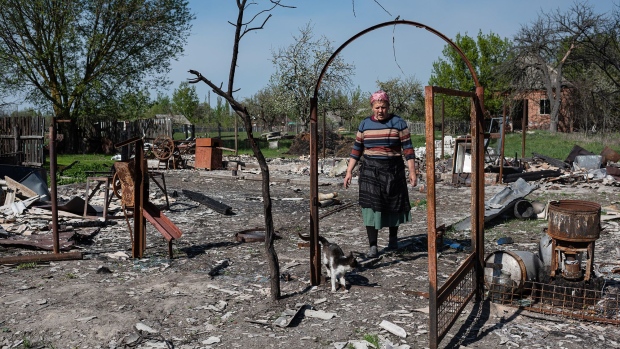 Tetiana Chernenko, 50, walks through her damaged property, on May 10, 2022 in Sloboda-Kukharivska, Ukraine. , Photographer: Alexey Furman/Getty Images

(Bloomberg) -- Group of Seven finance ministers meeting in Bonn this week will discuss an aid package to support the immediate financial needs of Ukraine, according to government officials.

While final figures have not yet been decided, the G-7 will probably consider a preliminary contribution of 5 billion euros ($5.3 billion) for the first month, said two people familiar with the matter who declined to be identified because talks are ongoing. They are looking at a possible three-month package, one of the officials said.

The government in Kyiv has estimated the impact of the war could reach $560 billion, including indirect losses. The International Monetary Fund, which approved a $1.4 billion emergency loan for the country in April, expects Ukraine’s economy to contract 35% in 2022 because of the conflict.

A joint package by the G-7 would transform the group’s messages of solidarity for Ukraine into hard financial fact. Until now, finance ministers have held discussions twice since the war broke out, including a brief gathering in Washington on April 20 when they “expressed our unwavering support” for the country’s people and government.

Their meeting in Bonn this week will be the longest and most in-depth however, an event that in such a format would often indicate the preparation of a longer document on the state of the world as seen by the G-7.

“Eventually, Ukraine will need massive support and private investment for reconstruction and recovery, akin to the task of rebuilding in Europe after 1945,” US Treasury Secretary Janet Yellen said in a speech in Brussels Tuesday. “What’s clear is that the bilateral and multilateral support announced so far will not be sufficient to address Ukraine’s needs, even in the short term.”

Chiming with that, the US Senate on Monday overwhelmingly voted to move toward passage of $40 billion in military and humanitarian aid to Ukraine, underscoring the broad bipartisan support for the country as it defends itself against Russia’s invasion.

Meanwhile the European Union plans on Wednesday to present a set of proposals to help the country, expected to feature loans from the bloc’s budget, guaranteed by member states, to pay Ukrainian salaries and benefits, according to an official familiar with the matter.

Germany, the host country of the G-7 meeting, is open to discussing a broad set of measures to help Ukraine rebuild once Russia ends its war, including offering EU guarantees for financing, according to government officials.

During a cabinet meeting last week, Chancellor Olaf Scholz’s ruling coalition agreed Berlin would play a constructive role in debates about how to channel billions of euros to Ukraine, one of the officials said. Sending direct national payments is another option.