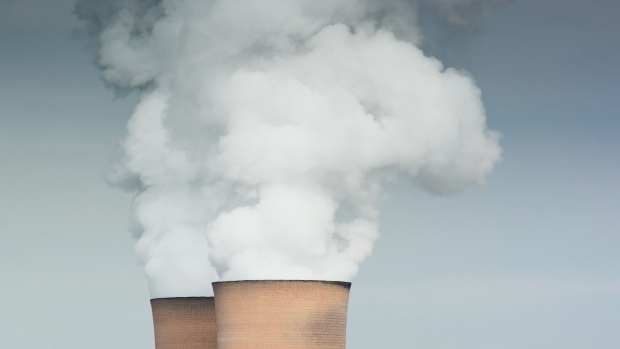 Vapor from cooling towers of the Eskom Holdings SOC Ltd. Kriel coal-fired power station in Mpumalanga, South Africa on Monday, March 21, 2022. A South African court ordered the government to take measures to improve the air quality in a key industrial zone, saying it had breached the constitution by failing to crack down on pollution emitted by power plants operated by Eskom and refineries owned by Sasol Ltd. Photographer: Waldo Swiegers/Bloomberg , Bloomberg

(Bloomberg) -- The Group of Seven is moving toward reversing a commitment to halt the financing of overseas fossil-fuel projects by year’s end, a proposal now viewed favorably by most members, according to people familiar with the matter.

G-7 leaders meeting in the Bavarian Alps are converging on a reference to the increased role of gas projects, a consequence of Russia’s invasion of Ukraine straining their energy supply.

French President Emmanuel Macron was among those who supported financing of new fossil-fuel projects during a meeting with the leaders of African nations on Monday, according to a person with knowledge of the talks.

The aim should be to convert such infrastructure to hydrogen, to reconcile “short term needs with long term climate needs,” Draghi added.

An updated text of the leaders’ statement shared with Bloomberg News refers to “the important role that increased deliveries of liquefied natural gas (LNG) can play in mitigating potential supply disruptions of pipeline gas, especially to European markets.”

Leaders “acknowledge that publicly supported investment in the gas sector is necessary as a temporary response to the current energy crisis, if implemented in a manner consistent with our climate objectives and without creating lock-in effects,” the text says.

The draft wording in the summit communique, initially backed by host Germany, is gaining traction as Europe races to secure alternatives to Russian gas. The German government has warned that Russia’s moves to limit supply risk a Lehman-like collapse in the energy markets, and Italy has rushed to sign new energy deals with African countries.

A senior official at the French presidency told reporters that it was envisaged gas investments would be permitted in the short-to-medium term on an exceptional basis given the circumstances, while the overall climate objectives as laid out at the UN COP26 summit are maintained.

A shift away from the commitment to end funding fossil-fuel projects - firmed up as a recently as May despite the energy shock caused by the war - would still represent a setback to global efforts to fight climate change. Such a move would make it harder to rally the rest of the world around more stringent targets and to direct investments toward cleaner sources of energy.

In the May commitment, G-7 nations acknowledged for the first time that fossil-fuel subsidies were incompatible with the Paris Agreement, but acknowledged that investment in the LNG sector was a necessary response to the current crisis “in a manner consistent with our climate objectives and without creating lock-in effects.”

In a separate G-7 declaration issued Monday and backed by partner nations including India, South Africa and Indonesia, leaders reaffirmed their commitments to keep the average temperature increase above pre-industrial levels to well below 2°C and resolved to pursue efforts to limit it to 1.5°C, the same levels agreed to in Paris, and again at COP26 in November.