Group of Seven leaders are discussing ambitious plans to shift the balance of car buying away from gasoline to greener vehicles by the end of the decade, as part of a package of measures to combat climate change.

Under one proposal contained in a document seen by Bloomberg, G-7 governments would “strive” to ensure that the majority of all new passenger car sales are not petrol or diesel-powered “by 2030 or sooner.” Countries are divided on how specific the measures should be.

All seven national leaders gathering for their summit in Cornwall, southwestern England, are also set to promise more funding to help the developing world cut carbon emissions, though details of how much are not clear.

The commitments have not yet been agreed to by G-7 officials who are drafting the conclusions of this weekend’s summit. But setting the goal for moving away from gasoline could represent a turning point in efforts to reduce global oil consumption and reduce greenhouse gas emissions. 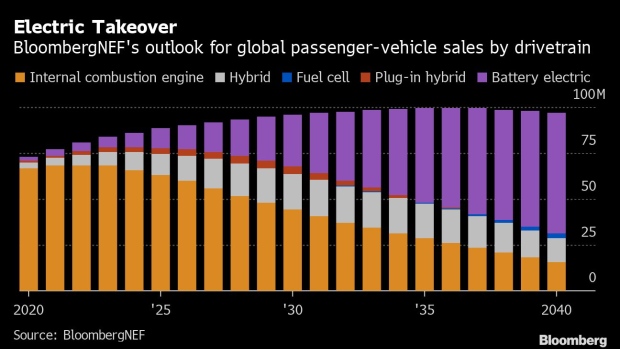 With a day to go before the summit begins, the plans are still in draft form and it’s not clear yet that leaders – crucially including U.S. President Joe Biden -- will endorse the proposed wording on moving away from polluting cars.

A U.S. official declined to say whether the White House supports the drafting under discussion, including whether to set a goal that more than half of vehicles sold in 2030 are non-emitting.

The official said Biden believes in strong investment in electric vehicle markets and the supply chain as a way to tackle climate change and create jobs. But the U.S.’s domestic plan doesn’t go as far as to call for a ban on combustion engine cars.

The biggest U.S. automakers have recently set targets for greener vehicle production. General Motors Co. announced in January that it aspired to eliminate tailpipe emissions from new light-duty vehicles by 2035. Ford Motor Co. pledged last month that four of every 10 vehicles Ford sells would be battery powered by 2030.

Sales of new electric cars will reach 34 per cent of the global total by 2030 and 68 per cent by 2040, assuming no further policy incentives from governments, according to BNEF forecasts.

Japan also issued a green strategy plan in December to make all new cars hybrid or electric by the mid-2030s, despite Toyota Motor Corp. President Akio Toyoda warning days before that governments announcing combustion-car bans were overlooking risks to jobs.

In the U.K., Prime Minister Boris Johnson, who is hosting the G-7 leaders’ gathering, will ban the sale of new cars running entirely on petrol or diesel from 2030, though the other nations are not likely to back such a dramatic step. At the moment, only a fraction of new vehicles sold in the U.K. are fully electric, with costs putting most consumers off.

According to proposed wording in the draft summit communique, leaders would commit to decarbonise their transport sectors throughout the 2020s by accelerating the spread of electric vehicles, and the development of zero carbon trains, buses, shipping and aviation.

On other climate change measures, the draft agreement include: