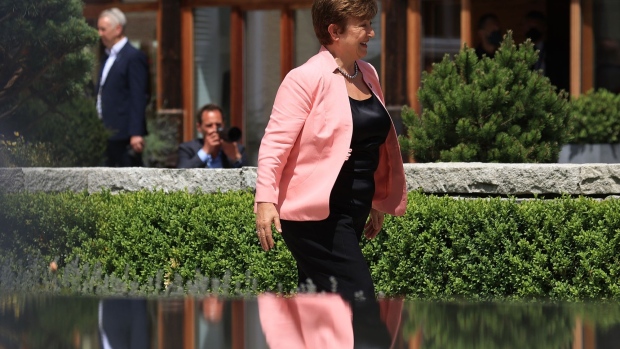 An oil pumping jack, also known as "nodding donkey", operated by Tatneft PJSC, stands in an oilfield near Almetyevsk, Tatarstan, Russia, on Wednesday, March 11, 2020. Saudi Aramco plans to boost its oil-output capacity for the first time in a decade as the world’s biggest exporter raises the stakes in a price and supply war with Russia and U.S. shale producers. , Bloomberg

(Bloomberg) -- The intellectual thrill of trying to figure out how to cut Russia’s energy revenue has animated the likes of Janet Yellen and Mario Draghi given their background as powerhouses in the field of economics. But politicians are likely to quietly abandon the concept after agreeing to explore it.

At the Group of Seven summit this week in Germany, it was undoubtedly the most-talked about item as leaders scratch their heads on how to punish President Vladimir Putin for his invasion of Ukraine.

Given its complexity, it’s no coincidence that its biggest fans could be found among the economists in their midst, including International Monetary Fund Managing Director Kristalina Georgieva, who attended the gathering in the Bavarian Alps.

Yellen, though not present, was working the phones trying to sell the idea of an oil price cap to fellow European finance ministers. Italian premier Draghi, who was in the room, was able to pull US President Joe Biden aside on the first evening after dinner for a chat. He’s more invested in the gas cap given his country’s remaining reliance on Russia for its energy needs. Both Draghi and Yellen are former central bankers who have made the transition into government and have discussed how all this could work.

The fact that it got a mention in the G-7 statement is an achievement in itself, yet it remains a Rubik’s cube no one has quite worked out how to solve. Biden’s national security advisor Jake Sullivan called it a “novel challenge” and something that cannot come “off a shelf.” Leaders essentially punted it to their ministers to work out the details given the complexities involved in making it workable.

It was described as a “possible comprehensive prohibition of all services, which enable transportation of Russian seaborne crude oil and petroleum products globally, unless the oil is purchased at or below a price to be agreed in consultation with international partners.”

In layman’s terms, it essentially means that banks, insurance companies and other parties could keep financing the trade in Russian oil, and countries could keep buying it, as long as the price Russia gets for the oil is no more than the “cap,” which proponents of the plan say should be close to the price of production or just slightly above it.

One senior G-7 official said to work, the idea would need the participation of many countries and a willingness to enforce it through secondary sanctions, a move which the US has so far steered away from. Other options such as tariffs and measures making it more costly for Russia to move its oil are also easier to implement, the person said.

Adopting the mechanism could be particularly problematic for the European Union, where agreement would be needed from all member states to change existing sanctions, such as a recently agreed insurance ban, or introduce new actions on shipping.

It nevertheless has captured the imagination of economists, and one in particular. Simon Johnson, professor of entrepreneurship at MIT and a former chief economist at the IMF,  has been working with one of President Volodymyr Zelenskiy’s economic advisers to build support for the idea within the war-torn nation. Johnson shares an academic heritage with Draghi, who earned his PhD at MIT, though they did not attend the institution at the same time.

The plan, as Johnson sees it, would leverage the interest that insurance companies and other firms have in facilitating the oil trade and use it to enforce the ban. Companies that fail to certify that oil is sold at a certain price or that willfully flout the ban would face penalties from the US, EU and UK, including potential sanctions.

Johnson, who got to know Oleg Ustenko, an economic adviser to Zelenskiy, through a Russian tanker tracking project, describes his role as merely a “supporter” of the idea but it’s apparent he’s an intermediary of sorts between the US and Ukraine, helping to knit together a network of support for the idea as it’s fleshed out.

“It’s not a heavy-handed dictatorial thing,” Johnson said in an interview. “It is leveraging the private sector in a framework in which they’re going to be willing to cooperate. They want to do the business and they can charge appropriate prices for the business. Nobody wants to squeeze them, they want to squeeze Putin.”

Ustenko and German GalusHchenko, Ukraine’s energy minister, wrote a recent article in the online journal “Project Syndicate” arguing that the best way to stop the Russian invasion “immediately” is “by setting a price cap on the seaborne oil exports that are still generating revenues for the Russian war machine.”

“Every day, more Ukrainians are being killed by Russian forces,” the pair wrote. “We cannot wait. We need the final piece of the strategy to lower the price paid to Russia for its crude and refined products, thereby limiting the Kremlin’s revenues.”

G-7 leaders heard Zelenskiy’s plea for help during a video address from Kyiv and promised Ukraine military and financial support for “as long as it takes.” Yellen released a statement about the oil cap announcement, calling it a “significant step” and promising Treasury would “work expeditiously with our counterparts in G-7 countries, and other global allies and partners, to advance this effort.”

The problem is that the issues involved are myriad and not just limited to securing agreement among the 27 nations of the EU, the UK, the US and others. They also touch on an existential question of how the world can control the price of a commodity that is fueling a war in Europe without damaging their own economies.

Adam Posen, president of the Peterson Institute for International Economics, expressed skepticism about the idea, questioning what incentives China and India -- the two buyers of Russian oil principally targeted by the price cap -- would have to comply with the regime.