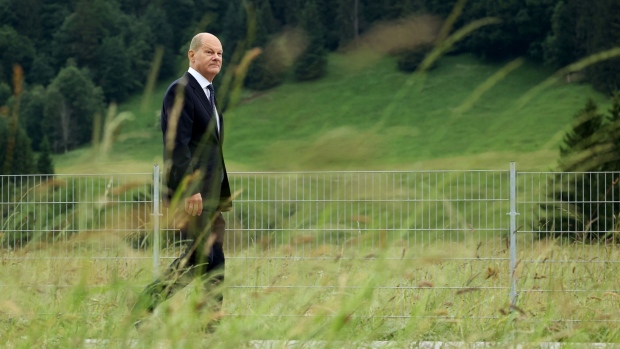 Olaf Scholz departs following his closing news conference on the final day of the Group of Seven (G-7) leaders summit in Elmau, Germany, on June 28. , Bloomberg

(Bloomberg) -- Leaders of the world’s richest economies spent the last three days wrangling over how to balance the need for new energy supplies and their existing emissions pledges. In the end, they reached a compromise that shows just how much Russia’s war in Ukraine is causing climate action to come to a standstill.

Exactly 12 months ago, at the Group of Seven summit in Carbis Bay, southwest England, leaders from the US, UK, France, Italy, Germany, Japan and Canada said they’d end overseas investment in coal. That deal helped drive climate momentum throughout the year. By September, China, the world’s biggest polluter, said it would stop building overseas coal power stations, while the US pledged to double its share of climate finance for poor countries.

That helped pave the way for a deal at COP26 in Glasgow to phase down the use of coal power and come back with updated national climate pledges by the end of 2022.

This year, against a very different global backdrop, things aren’t looking so positive.

At the summit in the Bavarian Alps, Germany’s Chancellor Olaf Scholz, who holds the rotating G-7 presidency, wanted other countries to back publicly supported investment in the gas sector as a necessary “temporary response to the current energy crisis.” Such a move would mark a u-turn for countries, after ministers agreed only last month to halt the financing of overseas fossil-fuel projects by the end of this year.

The UK disagreed with Scholz. Italy appeared on the fence. In the end, the leaders agreed a torturous compromise, which left the door open for new gas investments, while avoiding any clear backsliding on climate agreements made to date.

“In these exceptional circumstances, publicly supported investment in the gas sector can be appropriate as a temporary response, subject to clearly defined national circumstances, and if implemented in a manner consistent with our climate objectives and without creating lock-in effects, for example by ensuring that projects are integrated into national strategies for the development of low-carbon and renewable hydrogen,” the final text read.

While the G-7 leaders agreed any new gas projects should seek to avoid “locking in” emissions, David King, the former UK chief scientist, was skeptical. Once a new fossil-fuel project is built, King said, it’s likely to remain in place because of the supply chain that will be built up around it. The gas can’t just simply be one day “switched to hydrogen,” he said in an interview. “It’ll highly likely become locked in unless you treat it as a stranded asset.”

The summit did “commit to a highly decarbonized road sector by 2030” and “a fully or predominantly decarbonized power sector by 2035.” But the leaders failed to set a date for phasing out coal, which has seen demand -- and its price -- soar as a result of the energy crunch.

“Chancellor Scholz failed to mobilize new climate commitments from G-7 leaders, leaving a huge gap for them to fill in the next four months to have credibility come COP27,” said Alex Scott, program leader at the think tank E3G. The lack of progress was all the more significant because just six months ago, Scholz said he wanted to use his presidency at the G-7 to boost climate action.

Alok Sharma, the COP26 president, and a member of the UK government, said the wrangling in Germany highlights the difficult circumstances faced by governments as they turn their backs on Russian gas.

“As a government minister you’ve got to do everything you can to ensure that the lights stay on, that businesses work, that factories operate and therefore meeting your immediate energy needs is understandable,” he said at the India Global Forum in London on Tuesday.

The litmus test now will be what actions individual countries take to step up climate action between now and COP27. So far, none of the G-7 countries have delivered on their COP26 promise to come back with more ambitious national climate pledges. Rich countries have also still failed to deliver on their decade old pledge to mobilize $100 million a year for poor countries to deal with climate change.

If the G-7 and G-20 fails to deliver fresh ambition, an alternative might be a new so-called Climate Club. The concept, agreed this week, was one bright spot in the talks -- though it won’t be established until the end of this year. The idea is that members have joint rules and standards in the fight against global warming, in a bid to avoid spats over green tariffs.

“Maybe the G-7 is not where we need to look for leadership anymore,” said Friederike Röder, vice president at the non-profit Global Citizen. “Now it’s really up to every country to show what they are really willing to do, and to what extent they mean business on climate.”