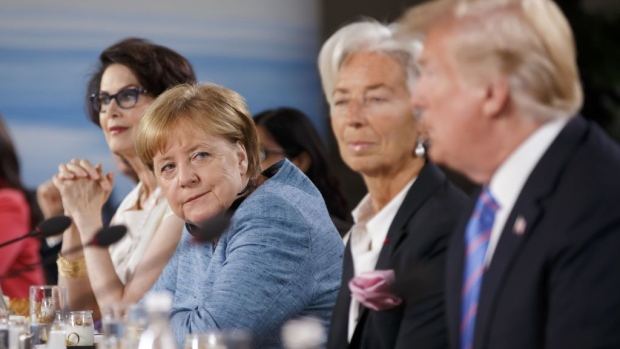 Historians may look back at this weekend’s gathering of world leaders in the French port city of Biarritz as a squandered opportunity.

The global economy is weakening, trade wars are escalating and major economies like Germany are sliding toward recession. But Group of Seven allies are so divided there’s little hope for the type of coordinated response that sprang from similar meetings a decade ago.

Amid the growing financial crisis in 2008, then-President George W. Bush called an emergency G-20 meeting that yielded a roadmap to combat the worldwide slowdown. Along with subsequent multilateral actions, it’s widely seen as having helped avoid a deeper downturn.

Now disagreements over everything from Iran’s nuclear program to Brexit to the future of the global trading system likely will stand in the way of unified solutions.

U.S. President Donald Trump has dismissed accusations his tariff assault on China and threats to impose duties on Europe’s auto industry are contributing to any slowdown.

As Shawn Donnan, Raymond Colitt and Toru Fujioka write, the brightest economic hope for this round may be just that things don’t get any worse.And while the world’s political leaders squabble, it may be left to central bankers conducting their own retreat some 5,000 miles away in Jackson Hole, Wyoming, to save the day.

Amazon brouhaha | French President Emmanuel Macron’s call on the G-7 to tackle the fires raging in the Amazon jungle has set up the summit's first flash point. It’s sure to irritate Trump, who pulled out of the Paris Climate Accord, and has already riled Brazilian President Jair Bolsonaro, who said discussing the issue without his nation’s involvement reflects a “colonial mentality.”

Seeds of discontent | Top Trump officials met yesterday to consider options for quelling a backlash in politically important farm states, Jennifer A. Dlouhy and Mario Parker report. The topic of discussion? Recent administration moves that would slow biofuel use. They’re trying to blunt anger in Iowa and other states critical to the president’s re-election in 2020.

Online army | The technology underpinning Hong Kong’s leaderless protests is a major reason there’s no end in sight: Online discussion groups are the movement’s backbone, and authorities who've tried to subdue it can’t simply lock up the masterminds and send everyone home. And no single leader has emerged with enough clout to call demonstrators off — or negotiate with the government. One of the biggest tests of unity will come this weekend, when netizens are again planning to disrupt airport operations.

Tiring of war | From his heavily fortified compound west of Libya’s capital, Ghassan Salame has a ringside seat as two forces battle for control of the country. The United Nation’s special envoy, his mission is to end fighting between the internationally-recognized government and its chief rival, commander Khalifa Haftar, that’s been fueled by the ambitions of regional powers. His argument, writes Samer Khalil Al-Atrush? No one can win this deadlocked contest.

And finally ... Prime Minister Boris Johnson believes a U.K. economy free of the EU will see depressed British port cities roar back into life as tax-exempt zones. He’d be well advised to have a look at the concrete bunker on the edge of Luxembourg’s airport. As Hugo Miller and Stephanie Bodoni report, the reality can be a nightmare as such duty-free facilities face growing criticism for being conduits of money laundering and tax evasion.

--With assistance from Karen Leigh.

To contact the editor responsible for this story: Ruth Pollard at rpollard2@bloomberg.net, Karl Maier