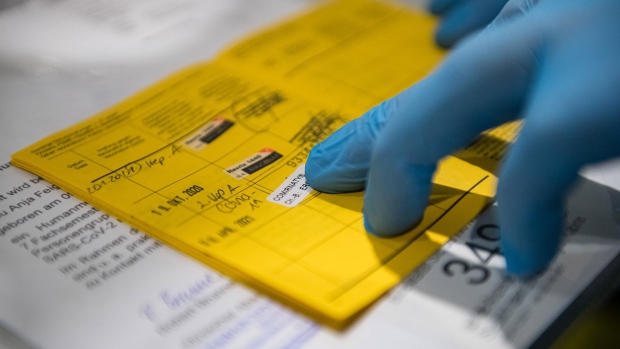 ERFURT, GERMANY - APRIL 08: A doctor puts a sticker for the Pfizer/BioNTech vaccine against Covid-19 in an certificate of vaccination at a vaccination center at the Messe trade fair grounds during the third wave of the coronavirus pandemic on April 8, 2021 in Erfurt, Germany. German authorities are expecting a strong increase in the volume of inoculations in April as vaccine supplies stabilize. Germany began vaccinations in late December and authorities predict as many vaccine doses to arrive in April as in the three months before. So far about 13% of people in Germany have received a first dose. (Photo by Jens Schlueter/Getty Images) , Photographer: Jens Schlueter/Getty Images Europe

(Bloomberg) -- The Group of Seven nations will next month discuss ways to recognize Covid-19 vaccination certifications internationally, according to a person familiar with the matter.

The group of major economies aims to support the creation of a global framework for mutual recognition of documents showing proof of inoculation, said the person, who asked not to be identified. Such an endorsement, if it leads to the creation of concrete measures, would ease the revival of global travel as more people get the coronavirus jab. It would be especially welcomed by the airline and tourism industries, among the hardest hit by the pandemic.

The European Union announced this week that it will soon allow quarantine-free travel to the bloc for vaccinated visitors. The move hasn’t been matched by other G-7 members, with the U.S. yet to loosen rules for European visitors. The U.K. requires travelers from the vast majority of the EU to quarantine and is advising against travel to several nations. The EU is also in the final stages of approving a framework for member states and their vaccination certificates.

As part of a declaration that G-7 health ministers will adopt when they meet in Oxford in early June, the group is expected to set out the need for multilateral collaboration on an inter-operable, standards-based solution that can be used internationally to verify vaccinations.

G-7 health ministers could recommend working within World Health Organization processes “to develop international standards and recommended practices for the creation, use, and mutual recognition” of certificates for “safe, effective, and rigorously reviewed vaccines,” a draft of the declaration says. Any framework should allow for both for digital and paper-based formats.

The declaration is a draft and views differ among the countries over how strongly to endorse the plans. Negotiations are ongoing and the declaration could change before the ministers meet on 3-4 June.

The U.K. government, which is hosting this year’s G-7, didn’t immediately respond to a request for comment.

Elsewhere, the ministers are expected to commit to taking action across in other areas:

The G-7 ministers are also expected to reaffirm their commitment to a number of topics that had been cast aside during the Trump presidency, including achieving universal health coverage, and the sexual and reproductive health and rights of all persons.