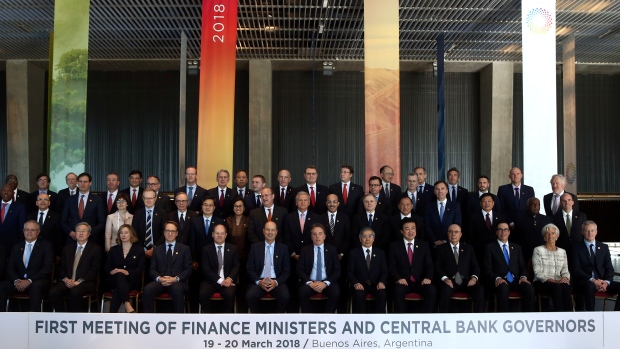 Finance ministers and Central Bank presidents pose for the official photo at the G20 Meeting of Finance Ministers in Buenos Aires , Reuters

Finance ministers and central bankers of the world's 20 biggest economies, the G20, issued the change to their communique as a two-day meeting in Buenos Aires drew to a close amid worries about the potential for a global trade war.

The statement added a phrase that was not in their initial draft, which stresses the need for further talks on trade issues.

"International trade and investment are important engines of growth, productivity, innovation, job creation and development," the G20 said. "We reaffirm the conclusions of our leaders on trade at the Hamburg Summit and recognize the need for further dialogue and actions. We are working to strengthen contribution of trade to our economies."

Many G20 officials fought hard at the meeting to preserve language from the Hamburg Summit, which was signed by Trump in July 2017, which said that G20 countries would "continue to fight protectionism including all unfair trade practices."

The Hamburg statement also said that G20 leaders "recognize the role of legitimate trade defense instruments", an ambiguity which provides the U.S. with a way to argue its cause on the tariffs. Trump's steel and aluminum tariffs are based on a Cold War-era national security trade law.

The new G20 language on the need for trade dialogue comes as Trump is readying plans to punish China with tariffs over its intellectual property practices.

Two officials briefed on the matter said Trump is expected to unveil tariffs on up to US$60 billion in Chinese technology and telecoms products by Friday, the same day when a tariff of 25 percent on imported steel and 10 percent on aluminum are to apply.

In the final communique, the G20 ministers repeated their traditional pledges to refrain from competitive devaluations and avoid targeting their foreign exchange rates for export advantage.

But they also added some new language on exchange rates, emphasizing stability and flexibility:

"Strong fundamentals, sound policies, and a resilient international monetary system are essential to the stability of exchange rates, contributing to strong and sustainable growth and investment. Flexible exchange rates, where feasible, can serve as a shock absorber," the communique said.

The G20 also called for continued international monitoring of cryptocurrencies such as bitcoin, and their risks. It said these assets raised issues with consumer and investor protections, market integrity, money laundering and terrorist financing.

"Crypto-assets lack the key attributes of sovereign currencies. At some point they could have financial stability implications," the G20 ministers said.