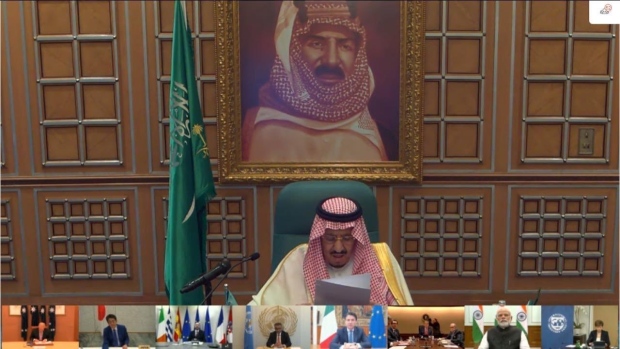 Screengrab of the G20 virtual summit hosted by Saudi Arabia on Mar. 26, 2020. , Image courtesy of @FaisalbinFarhan via Twitter

Leaders from the Group of 20 nations on Thursday said they were injecting over US$5 trillion into the global economy and committed to do “whatever it takes” to overcome the coronavirus pandemic and its fallout.

“The virus respects no borders,” they said in a joint statement after an extraordinary G20 leaders’ summit convened virtually amid the outbreak. “We are strongly committed to presenting a united front against this common threat.”

The #G20VirtualSummit chaired by the Custodian of the Two Holy Mosques convened to establish a collective effort to face the challenges posed by #COVIDー19 , with a message of solidarity announced from Riyadh to the whole world: we must work together to prevail over this pandemic pic.twitter.com/olJ2OHf8gv

The gathering, chaired by Saudi Arabia, was joined by leaders from member countries and included representatives of international organizations such as the United Nations. Coordination among G20 countries was instrumental for action to stabilize the global economy during the financial crisis that started in 2008.

“We will continue to conduct bold and large-scale fiscal support,” the leaders said. “The magnitude and scope of this response will get the global economy back on its feet and set a strong basis for the protection of jobs and the recovery of growth.”

In a statement after the video call, Indonesian President Joko Widodo referred to two “wars” the world was facing: against the virus and against the weakening of the world economy.

“G20 must actively lead efforts to find anti-virus and Covid-19 drugs,” he said. At the same time, “we must prevent a global economic recession, through coordinated fiscal and monetary policies, and expand and strengthen social safety nets.”

The joint statement made no mention of the oil shock triggered by the price war between Saudi Arabia and Russia. The Trump administration is pressing Saudi Arabia to dial back its plan to flood the oil market after crude prices crashed to their lowest levels in almost two decades.

Secretary of State Michael Pompeo spoke with Saudi Crown Prince Mohammed bin Salman on the eve of the conference call in the most direct intervention yet by the U.S.

With parts of Europe and the U.S. in the grip of the outbreak, governments across the world are desperately trying to acquire and stockpile critical medical supplies such as masks, ventilators and gowns as frontline doctors and nurses face shortages. That’s forcing many of the biggest makers to run factories around the clock to meet demand.

In a press release on Thursday, British Prime Minister Boris Johnson called on governments to work together “to create a vaccine as quickly as possible and make it available to anyone who needs it.” He said the U.K. was pledging an additional 210 million pounds (US$255 million) to that effort.

The G20 leaders also pledged more manufacturing and investment to meet the needs for medical supplies and ensure their availability “at an affordable price, on an equitable basis, where they are most needed and as quickly as possible.”

“We commit to strengthen national, regional, and global capacities to respond to potential infectious disease outbreaks by substantially increasing our epidemic preparedness spending,” they said.

The World Health Organization was also asked to cooperate with relevant organizations to assess gaps in pandemic preparedness and make a report in the coming months to a joint meeting of finance and health ministers.

“This initiative will capitalize on existing programs to align priorities in global preparedness and act as a universal, efficient, sustained funding and coordination platform to accelerate the development and delivery of vaccines, diagnostics and treatments,” the statement said.

The G20 highlighted the threats faced by countries in the developing world -- especially in Africa and small island nations -- whose health systems and economies might struggle to contain the outbreak. It also drew attention to the risks faced by refugees and displaced persons.

“We consider that consolidating Africa’s health defense is a key for the resilience of global health,” the leaders said.