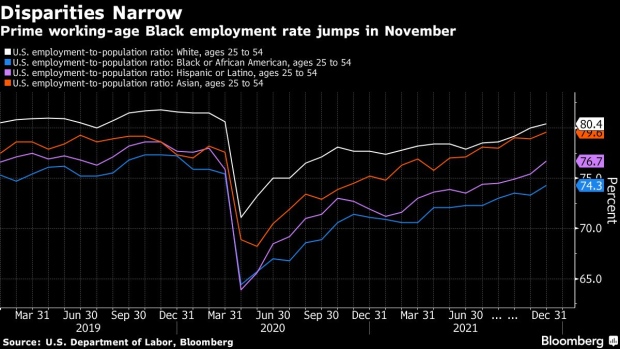 (Bloomberg) -- The November jobs report was arguably good news for the Federal Reserve’s goal to achieve a “broad-based and inclusive” labor market, as prime working-age employment rates for Black and Hispanic Americans narrowed the gap with that for their White counterparts.

The employment-to-population ratio for Black Americans aged 25 to 54 rose to 74.3% last month from 73.3% in October, according to unadjusted data published Friday by the Labor Department. The same metric for Hispanic or Latino Americans surged to 76.7% from 75.4%.

The Federal Reserve last year redefined its own interpretation of its congressionally-mandated maximum employment goal as a “broad-based and inclusive” one.

Fed officials have since declined to spell out exactly what that means in terms of hard numbers, but reports like Friday’s will help reinforce the notion that the labor market is at least headed in the right direction on that score.

While the gaps are narrowing, there’s still a long way to go before they are erased completely.

The ratio of so-called “prime-age EPOP” for Black Americans relative to White Americans jumped to 92.4% in November from 91.6% the month before. But it’s still well below the peak of 94.9% achieved in January 1999, and again in September 2018 -- let alone the 100% mark that would signal true parity in employment rates.