It’s going to be an inflationary summer and we’ll likely see it recede in the fall: Art Hogan

Prices paid by U.S. consumers rose in May by more than forecast, extending a months-long buildup in inflation that risks becoming more established as the economy strengthens.

The consumer price index climbed 0.6 per cent, the second-largest advance in more than a decade. Though distorted by the pandemic, the CPI jumped 5 per cent from a year ago, the largest annual gain since August 2008, according to Labor Department data Thursday. 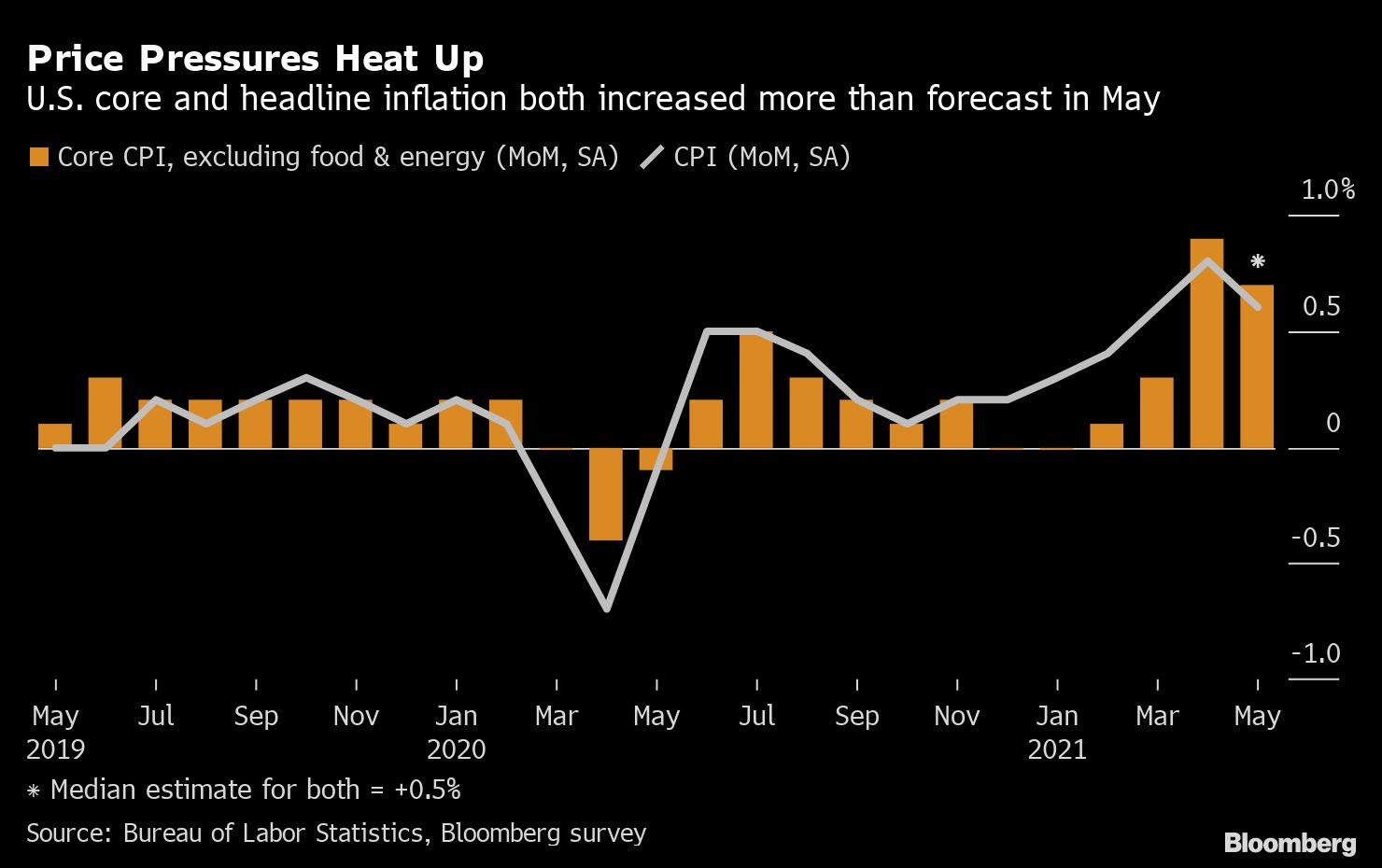 The gains were in large part driven by the pricing snapback in categories associated with a broader reopening of the economy. The CPI report showed steady growth in the costs of used vehicles, household furnishings, airfares and apparel.

The increase in previously owned cars and trucks accounted for about one-third of the total monthly advance in the CPI, the Labor Department said.

While the large gains in these areas support the Federal Reserve’s view of temporary price pressures, “we see signs of inflationary pressures broadening out, which we believe will keep monthly price gains from merely falling back to their pre-pandemic trend,” Wells Fargo & Co. economists Sarah House and Shannon Seery said in a note.

Price pressures continue to build across the economy as businesses scramble to balance a rush of demand against shortages of materials and, in some cases, labor. Shipping bottlenecks, higher input costs and rising wages are challenges to companies looking to protect profit margins.

Excluding the volatile food and energy components, the so-called core CPI rose by a larger-than-forecast 0.7 per cent. The core measure rose 3.8 per cent from 12 months ago, the most since 1992. It’s also distorted by the comparison to the pandemic-depressed reading last year.

Underscoring the clear acceleration in inflation more recently, the core CPI over the past three months has increased at a 5.2 per cent annualized pace, the fastest since 1991. 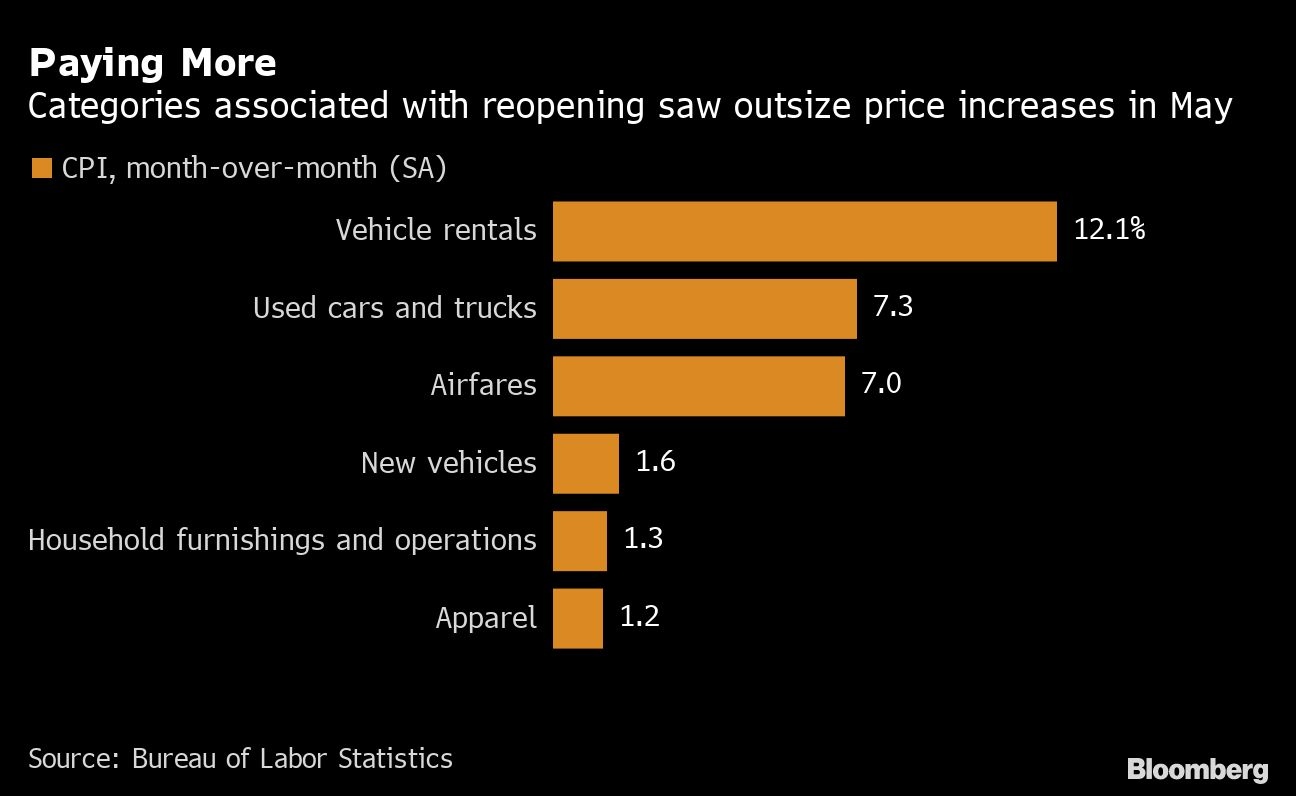 Strong consumer spending on merchandise -- in part driven by government stimulus -- has led to growing orders backlogs and lean inventories. The lifting of pandemic restrictions, increases in vaccinations and a flurry of social activity are translating into more services demand -- another propellant for inflation.

The question economists and investors are wrestling with is whether these factors will have a temporary impact on inflation as the Fed expects or whether they will become more ingrained against a backdrop of massive fiscal and monetary policy support.

After rising rising earlier, the yield on the 10-year Treasury slipped back below 1.5 per cent as investors digested the data. The dollar was little changed and the S&P 500 advanced to a fresh record. Separate figures showed applications for state jobless benefits declined for a sixth straight week.

A slew of companies have raised prices or announced plans to do so, including Chipotle Mexican Grill Inc. and Reynolds Consumer Products Inc.

Even though orders and backlogs at Hooker Furniture Corp. are elevated, “we’re cautiously optimistic, considering the industry-wide supply chain logistics and raw materials shortages and inflation,” Chief Executive Officer Jeremy Hoff said on the company’s June 4 earnings call. “We believe we have mitigated these dynamics as much as possible through surcharges and price increases.”

Fed Chair Jerome Powell has said upward pressure on prices is likely to be temporary, noting in late April that “in an episode of one-time price increases as the economy reopens is not the same thing as, and is not likely to lead to, persistently higher year-over-year inflation into the future.”

Others disagree, citing trillions of dollars in fiscal support, the likely persistence of product shortages and rising labor costs. Bond market expectations for the pace of inflation over the next five years have been easing from a 15-year high last month but remain elevated.

“The frothiness in CPI continues for now but between base effects and pent-up demand pressures, it is probably not giving a definite answer to the great inflation debate, and you need to read the bond market tea leaves,” said Anu Gaggar, senior global investment analyst at Commonwealth Financial Network.

While wage growth has blown past economists’ estimates in the last two monthly jobs reports, the rise in consumer prices has taken a sizable toll. Inflation-adjusted average hourly earnings declined 0.2 per cent in May after a 0.1 per cent drop, separate data showed Thursday. The retreat in real earnings, if it persists, could prompt workers to ask for a bump in pay. 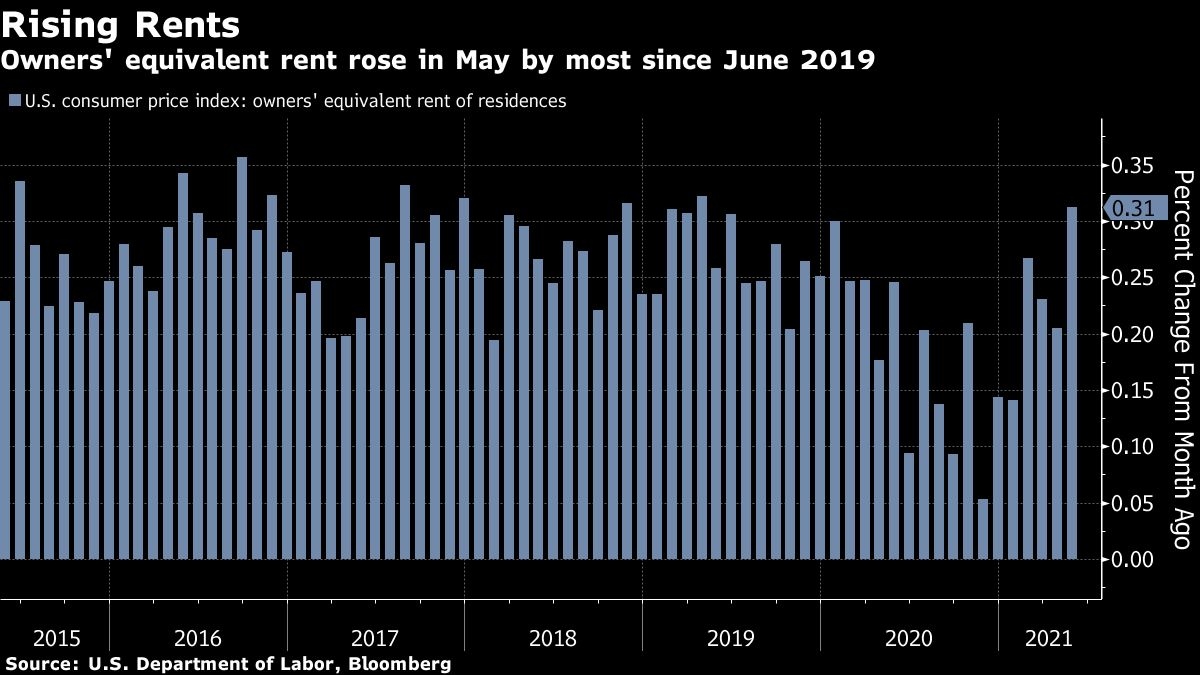 “While transitory factors did a lot of the heavy lifting driving the May upside, the more persistent components like rents and OER firmed up as well much more than expected, pointing to a firmer source of foundation for the inflation data as the transitory factors begin to fall out of the figures,” economists at Morgan Stanley said in a note.