Biden's additional spending is unnecessary when the focus should be on debt: Strategist

A gauge of U.S. manufacturing quickened in May, propelled by stronger growth in orders -- which factories are having trouble satisfying because of supply shortages and labor constraints.

A measure of factory activity rose to 61.2 from 60.7 a month earlier, according to data released Tuesday by the Institute for Supply Management. Readings above 50 indicate expansion, and the May figure was about in line with projections. The report also showed still-elevated input prices and a fresh high in order backlogs.

The increase in the group’s gauge of new orders -- just below a more than 17-year high -- and the longest delivery times since 1974 indicate manufacturers continue to struggle with materials shortages, shipping delays and difficulty finding skilled labor. 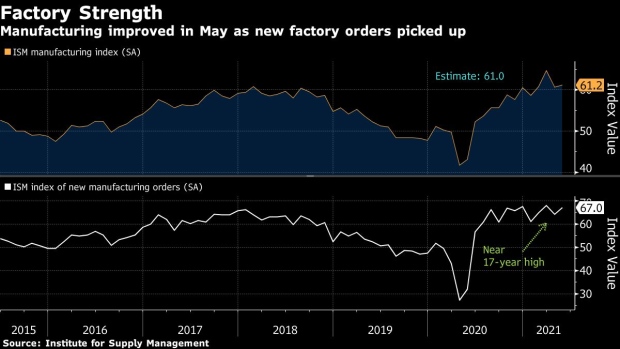 Production in May expanded at the slowest pace in nearly a year, the ISM’s measure showed, adding to evidence that the persistent supply, transportation and labor-market challenges are constraining factories from reaching their full potential.

“Panelists’ companies and their supply chains continue to struggle to respond to strong demand due to the difficulty in hiring and retaining direct labor,” Timothy Fiore, chair of the ISM’s manufacturing business survey committee, said in a statement. “The manufacturing recovery has transitioned from first addressing demand headwinds, to now overcoming labor obstacles across the entire value chain.”

The ISM employment gauge dropped to a six-month low of 50.9 from 55.1 a month earlier. Fiore said on a call with reporters that once the government’s enhanced unemployment benefits expire, the labor market will be “much more in sync with demand and supply.”

Recent manufacturing surveys from the Federal Reserve Banks of Philadelphia, Kansas City and New York showed a similar tempering of factory employment growth in May. That could impact Friday’s monthly jobs report, which is forecast to show the U.S. added about 650,000 jobs last month.

The ISM’s report showed 16 of 18 manufacturing industries reported growth in May, led by makers of furniture, mineral products and plastics. The S&P 500 declined along with the dollar, while the 10-year Treasury yield rose.

Delivery times lengthened further in May, with the ISM’s gauge advancing to 78.8, the highest since April 1974.

The group’s gauge of production declined 4 points to 58.5 in May. An easing of supply shortages would help deliver faster output growth and allow businesses to replenish lean inventories.

“Supplier performance — deliveries, quality, it’s all suffering. Demand is high, and we are struggling to find employees to help us keep up.” - Computer & Electronics

“Difficulty finding workers at the factory and warehouse level is not only impacting our production, but suppliers’ as well.” - Food, Beverage & Tobacco

Supply shortages and lack of skilled labor “situation does not look to improve until possibly the fourth quarter of 2021 or beyond.” - Fabricated Metal

The group’s gauge of prices paid for materials eased in May from the highest level since mid-2008.