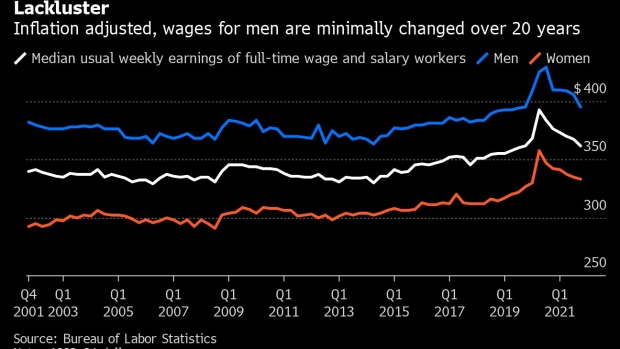 (Bloomberg) -- Weekly earnings of U.S. full-time workers picked up at the end of 2021 from a year earlier, but significantly less than inflation, government figures showed Wednesday.

Median earnings of the more than 116 million workers averaged $1,008 in the fourth quarter, up 2.6% from a year earlier, according to the Bureau of Labor Statistics. At the same time, the consumer price index jumped 7% in December from a year earlier, the biggest increase in nearly four decades.

When adjusted for inflation, the median income for full-time workers is the same as it was at the end of 2019, before the pandemic. Furthermore, changes in earnings over the past 20 years have been minimal.

The seasonally adjusted median weekly paycheck for men, unadjusted for inflation, averaged $1,100 in the fourth quarter. For women it was $928, or 84.4% that of men.

Gender earnings ratios varied by race and ethnicity. While Black women earned nearly just as much as Black males, the difference was stark among Asian Americans. Median earnings of Asian women was 77.7% as much as Asian men, on an unadjusted basis.

By race and ethnicity, men earn more than women but an interesting shift has occurred in recent years. The median weekly earnings of Asian woman has exceeded those of White men for the past three years.

Earnings of Asian men were the highest and more than double those of Hispanic women. In 2021, median usual weekly earnings for Asian men averaged $1,453 compared with $718 for Hispanic women.

Large divergences in income occur by educational attainment. Full-time workers who are at least 25 years old and without a high school diploma had median weekly earnings of $651, compared with $1,467 for those holding at least a bachelor’s degree.

And, among college graduates with advanced degrees, the highest earning 10% of male workers made $4,317 or more per week.