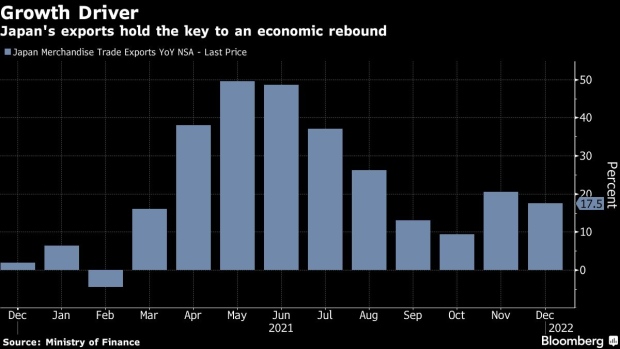 Toyota Motor Corp. vehicles bound for shipment at the Nagoya Port in Nagoya, Aichi Prefecture, Japan, on Monday, Aug. 23, 2021. The worsening chip shortage forced the world’s No. 1 automaker suspend output for several days at almost all its plants in Japan next month, forcing a 40% cut in production plans. , Bloomberg

(Bloomberg) -- Gains in Japan’s exports narrowed slightly in December, led by cars and steel, following a wave of the omicron variant of coronavirus that swept the globe.

The value of Japan’s overseas shipments rose 17.5% from a year earlier, easing from 20.5% in November, the finance ministry reported Thursday. Economists had expected an increase of 15.9%. On a seasonally adjusted basis, exports fell 0.2% from the previous month.

Exports holding up adds to signs the economy probably rebounded in the final quarter of 2021 before the omicron variant took hold in Japan and overseas. Still, the renewed virus outbreak may cut demand for shipments going forward.

The Tokyo metropolitan government is seeking to have bars and restaurants close early under a virus quasi-emergency as case numbers soar to a record across the country.

Toyota Motor Corp. is cutting its February production by around 20% due to chip shortages, according to the Nikkei newspaper, while that output target is still up from a year earlier.

Strong imports, helped by a weaker yen, continue to reflect rising cost pressures for Japanese companies, most of which have yet to pass on the burden to consumers out of fear of losing them to competitors. Higher energy prices may also weigh on consumption at home, with the government trying to ease that burden via subsidies.

“Looking ahead, we expect exports to decrease in January as soaring Covid-19 cases in many overseas markets weigh on external demand.”

Bank of Japan Governor Haruhiko Kuroda this week maintained his stance that the current weakness in the yen is positive for the overall economy after the central bank adjusted its price views slightly and maintained the main policy framework.