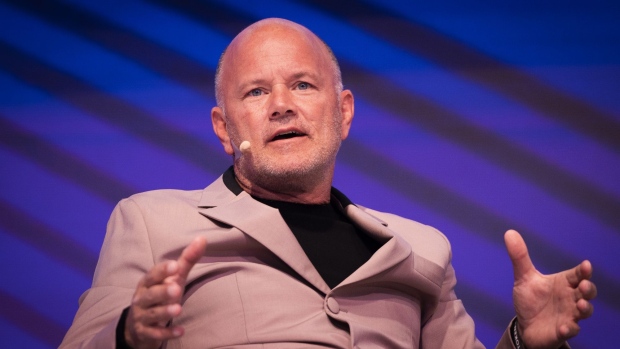 Mike Novogratz, founder and chief executive officer of Galaxy Digital LP, speaks during the TOKEN2049 in Singapore, on Wednesday, on Sept. 28, 2022. The cryptocurrency event runs through Sept. 29. , Bloomberg

The deal for GK8 was agreed at a purchase price of $44 million in cash plus $100,000 in assumed liabilities, according to a court filing. Celsius had previously acquired GK8 for $115 million in November 2021.

The acquisition, which was announced on Dec. 2 and is subject to court approvals, would add a team of nearly 40 staffers to Galaxy’s workforce.

Ryan Kielty, a partner at restructuring group Centerview Partners which was hired to oversee the auction of the assets, said in the filing that selling GK8 was a reasonable move by the debtors, given “the steep decline” in crypto prices after Celsius initially bought the platform, among other things.

GK8’s marked-down price tag is reflective of soured crypto prices more broadly, which have taken a tumble since the business’s last valuation. Bitcoin reached its all-time peak at almost $69,000 last November, yet the token presently trades around 75% lower at about $16,800.

Six firms had submitted initial bids at the start of the auction process, Kielty said, but only Galaxy submitted a final bid and deposit by the agreed deadline. Its terms included the requirement that GK8 co-founders Lior Lamesh and Shahar Shamai stay with the company.

--With assistance from Rick Green.