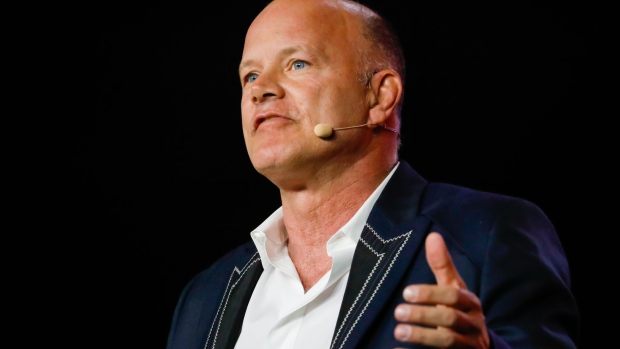 Mike Novogratz, chief executive officer of Galaxy Investment Partners, speaks during the Bitcoin 2022 conference in Miami, Florida, U.S., on Friday, April 8, 2022. The Bitcoin 2022 four-day conference is touted by organizers as "the biggest Bitcoin event in the world." , Bloomberg

(Bloomberg) -- Mike Novogratz, the founder and chief executive of Galaxy Digital Holdings Ltd., said that two-thirds of the hedge funds that invest in cryptocurrencies will fail as a consequence of the current market downtown.

“Volume will go down, hedge funds will have to restructure,” Novogratz said at the Piper Sandler Global Exchanges & Brokerage Conference in New York. “There are literally 1,900 crypto hedge funds. My guess is two thirds will go out of business.”

Novogratz cited the digital-asset market’s reaction to the Federal Reserve’s removal of stimulus as the reason for the collapse in token prices over the past six months. Bitcoin has dropped more than 50% from the record highs reached in November.

The former Fortress Investment Group hedge fund manager has been the subject of criticism as of late for his and Galaxy’s role in the recent collapse of the Terra blockchain.

Novogratz has said the coin’s collapse dented confidence in the cryptocurrency and decentralized finance space.