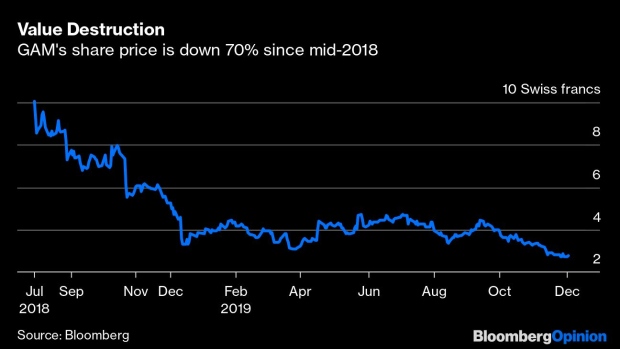 (Bloomberg Opinion) -- The suspension and subsequent dismissal of your star portfolio manager. The resignation of your chief executive officer. A 70% decline in your share price. Customers pulling 40% of their funds. Abandoned talks with potential buyers. If what Swiss fund manager GAM Holding AG has suffered in the past year and a half is, as an activist shareholder says, the result of “a mis-managed storm in a teacup,” then I’d hate to see the aftermath of a real crisis.

GAM shareholder Bluebell Capital Partners has written to GAM Chairman David Jacob accusing the firm of taking “undue and unnecessary” actions in response to its investigation of Tim Haywood, who managed its flagship absolute return bond funds. Its decision in July 2018 to halt redemptions from those funds resulted in “massive self-inflicted shareholders’ value destruction,” Bluebell says in the letter, dated Nov. 28 and seen by my colleagues at Bloomberg News.

The destruction in shareholder value is plain to see. But self-inflicted?

A quick recap. Haywood was investing in unlisted securities issued by companies controlled by British industrialist Sanjeev Gupta. GAM initiated an investigation into what it called “some of his risk management procedures and his record keeping,” and suspended him in mid-2018. In November 2018, CEO Alex Friedman stepped down. In February of this year, GAM dismissed Haywood for “gross misconduct.” Investors have been pulling cash from the fund management firm ever since they first learned of the probe.

Arguably, GAM acted too slowly in dealing with the issue. An internal whistle-blower first raised concerns about Haywood’s conduct in November 2017. In March 2018, the informant “expanded on the initial concerns” and got in touch with the Financial Conduct Authority, the U.K. financial services regulator — at which point GAM was duty bound to take action.

But it wasn’t until the end of July 2018 that the company announced the suspension of Haywood (who has said he was being made a “scapegoat”) and halted redemptions from the funds he oversaw — a full eight months after the first alert.

GAM is clearly still in deep trouble, as its share price illustrates. In October, it halted talks with potential suitors including Italian insurer Assicurazioni Generali SpA. Current CEO Peter Sanderson is now mulling staff cuts of as much as 40% of the workforce, my colleagues at Bloomberg News reported earlier this week. In many ways, GAM is emblematic of the fund management industry's ills, such as suffering from a cost base that’s out of line with its reduced circumstances as the downward pressure on fees remains relentless.

So Bluebell may well be right to call for GAM to initiate a “strategic review” of its white-labeling business, which it says generates fees of just 4.3 basis points, compared with 53.9 basis points for the investment management arm. But to argue that the debacle was a “storm in a teacup” that the firm could somehow have downplayed strikes me as revisionist wishful thinking.