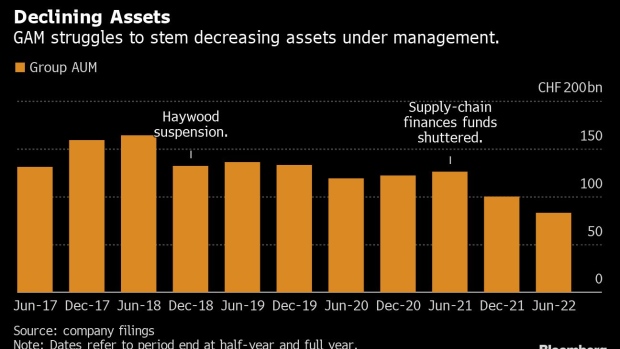 (Bloomberg) -- GAM Holding AG said it will post its fifth straight loss and pushed the publication of its 2022 results to April as the asset manager scrambles to come up with a strategy to turn around its business.

GAM expects a net loss after tax of around 309.9 million Swiss francs ($336 million) for 2022 on an IFRS basis, after a loss of 23.3 million for 2021, according to a statement on Wednesday. The loss is more than twice the company’s market capitalization of 155 million francs.

GAM, which has seen its stock plunge 95% in the last five years, is struggling to adapt to the rising interest-rate environment and recover from asset outflows after shuttering several funds. It’s slashing costs in response and not replacing departing employees.

The full-year presentation will take place on April 25, the company said.

“2022 was a challenging year with our financial results seeing the impact from a market-led decline in our assets under management,” GAM Chairman David Jacob said in the statement. “The Board is working tirelessly to ensure that the firm is strategically positioned in the best interests of all our stakeholders.”

GAM shares fell as much as 5.6% in Zurich on Wednesday.

GAM revived plans for a potential sale last year, after a previous attempt failed amid a scandal involving the shuttering of nine funds and the dismissal of star bond trader Tim Haywood.

Haywood, a former bond manager at the firm, was ousted for “gross misconduct” in July 2018 after GAM was forced to liquidate more than $7 billion across the nine funds. Allegations had surfaced that there were shortfalls in documenting trades and managing risk. GAM completed the liquidation of the funds nearly a year after Haywood’s suspension, paying a 50-basis point premium to investors on their holdings.

The scandal sent the firm into a tailspin: it suffered massive losses, billions in outflows as clients pulled money, and decided to cut its workforce as well as slash bonuses for executives by almost two thirds. In 2019, GAM’s shareholders refused to back management in a sign of disapproval over the handling of the scandal and reserved the right to pursue legal action against management.

Haywood was fined £230,000 in 2021 by the UK’s Financial Conduct Authority for failing to manage conflicts of interest, while GAM was ordered to pay £9.1 million.

GAM has struggled to return to profitability since, and it is on its third chief executive officer. In March 2021, GAM was forced to shutter its $842 million supply-chain finance fund related to lender Greensill Capital when it collapsed.

Last summer, GAM decided to shutter six funds as part of a revamp of its fixed income trading strategies, amounting to a combined 167 million francs in assets. It turned its focus to strategies that include catastrophe bonds, local currency emerging market bonds, mortgage-backed securities and credit opportunities.

(Updates with details on historical losses and past fund closures throughout.)