Global gaming stocks rallied after Microsoft Corp.’s landmark US$69 billion takeover bid for Activision Blizzard Inc., a move that could help enliven the sector after a cranky start to 2022.

U.S. rivals Electronic Arts Inc., Take-Two Interactive Software, France’s Ubisoft Entertainment SA and Poland’s CD Projekt SA all rose on Tuesday, with some talked-up as potential acquisition targets. The recent selloff in their shares and rising interest in gaming and the metaverse from large companies such as Meta Platforms Inc. has raised expectations for more deals in the industry.

“If Microsoft can get them over the line without any antitrust issues, the rest are all in play,” said Neil Campling, an analyst at Mirabaud Securities who sees Electronic Arts as “the most obvious takeout target.” Ubisoft is seen as another potential target, but could be hurt by the family holding structure, according to Campling. 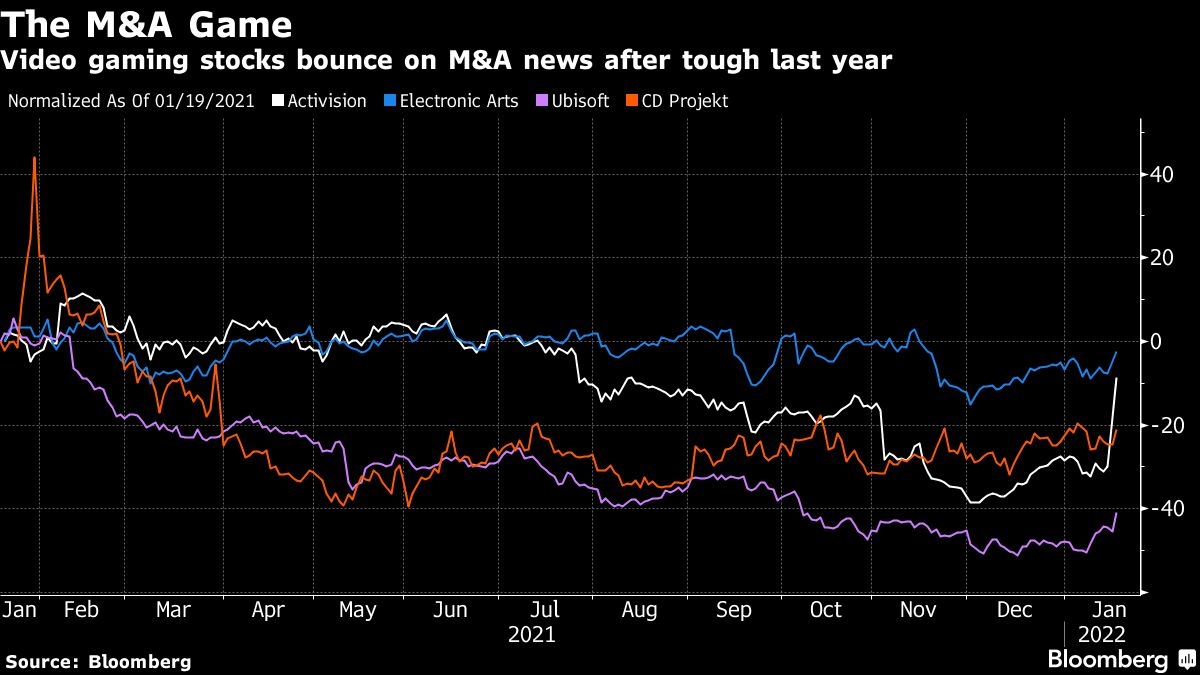 Microsoft’s push for Activision follows Take-Two’s recent offer for mobile game maker Zynga Inc. Cowen analyst Doug Creutz writes that the two deals, coming in consecutive weeks, highlights how “these companies carry a lot more strategic value than was being acknowledged by the market.” He speculated that Sony “might have to consider chasing their own blockbuster acquisition, in order to enhance its own exclusive portfolio.” If so, Electronic Arts would be the most logical choice, according to Cowen.

Jordan Klein, a managing director at Mizuho Securities, wrote that there were only a few key names that remained as possible targets, and that Ubisoft, Take-Two, and Electronic Arts could all see valuations expand as potential buyers “could look to make a move.” He noted attractive valuations for Take-Two and especially Electronics Arts, which “has one of the best game title libraries.” He named Netflix Inc., Walt Disney Co., Apple Inc., Amazon.com Inc., and Meta Platforms as potential buyers.

Activision shares jumped 26 per cent on Tuesday, while Electronic Arts rose 2.7 per cent and Take-Two rose 1 per cent. The rallies stood out on a day where tech was broadly lower amid ongoing concerns over bond yields. Microsoft fell 2.4 per cent.

Piper Sandler sees Unity Software Inc. as an indirect beneficiary of Microsoft’s move, writing that the deal represents “the beginning of a metaverse arms race.” Shares of Unity fell 4.5 per cent.