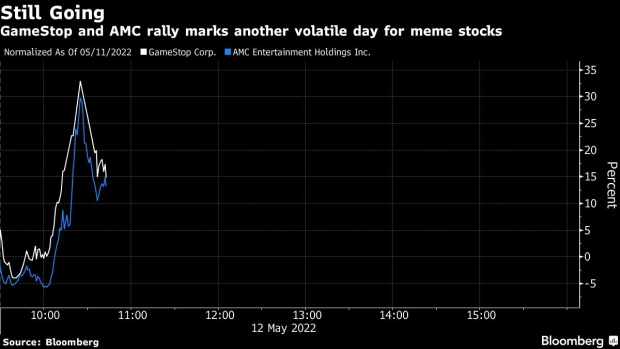 (Bloomberg) -- Big rallies for GameStop Corp. and AMC Entertainment Holdings Inc. are proving that there is still demand for meme stocks.

The video-game retailer soared as much as 33%, triggering at least four trading halts, as investors flipped shares of beaten-down stocks. The rally carried over to AMC Entertainment, the other poster-child of the so-called meme stock mania that gripped Wall Street last year, as shares of the movie theater company spiked more than 30% at one point.

The latest rally comes despite volatility for broader markets and is a sign that investors may be digging back into riskier assets. However, the gains pale in comparison to the surge that vaulted many meme stocks to the top of the Russell 2000 Index last year. GameStop trimmed gains to 15% at 10:50 a.m. in New York while AMC Entertainment was up 12%.

Both stocks were among the most bought companies on Fidelity’s platform on Thursday, rivaling Apple Inc. and Walt Disney Co. While the pair have tumbled from last year’s peak, they remain up more than 400% from the start of 2021.

A basket of 37 meme stocks tracked by Bloomberg rallied 7.9% in the first hour of trading, on pace to snap a five-day losing streak that wiped out one-fifth of its value. Even with Thursday’s bounce, the group is down nearly 60% from a June 2021 high.