To see how far GameStop Corp. has outrun anyone’s ability to render sensible analysis, consider what its current dizzying rally has done to Wall Street’s best guesses of its value.

Now perched close to US$75 a share, hoisted by a short squeeze ignited and arguably organized in chat rooms, the game retailer’s stock is about US$60 above the average forecast of equity handicappers tracked by Bloomberg. The ratio between the two is by far the biggest in the Russell 3000 and jumped for a third day, as crazed trading capped a stretch in which the 37-year-old company burned bears who had shorted 139 per cent of its shares.

It’s happening in a stock that before 2020 had fallen six straight years as earnings shrunk, and which isn’t projected to turn a profit before fiscal 2023. While fundamentals may one day matter again, GameStop has now become the latest show of force by newbie day traders in a market that seems more like their plaything each day.

The stock surged as much as 145 per cent to US$159.18 on Monday, at one point triggering at least nine trading halts. It briefly turned negative before bouncing back to trade up 22 per cent to US$79.56 at 2 p.m. in New York. The shares have advanced more than 320 per cent since the start of the year.

“It doesn’t make business sense,” said Doug Clinton, co-founder of Loup Ventures. “It makes sense from an investor psychology standpoint. I think there’s a tendency where there is heavy retail interest for those types of traders to think about stocks differently than institutional investors in terms of what they’re willing to pay.”

Right now, they’re willing to pay 471 per cent more than what analysts consider reasonable, on average. While perhaps fairly priced relative to its annual sales of about US$5.2 billion in the 12 months through October, those sales are down 40 per cent in just two years. The company is expected to report a per-share loss in both fiscal 2021 and 2022. To get a price-earnings multiple it’s necessary to look two years into the future, where the P/E is around 58.

Bears have seen more than US$6.1 billion mark-to-market losses this year, according to financial analytics firm S3 Partners.

While Wall Street may have no clue what GameStop shares are worth, it does have ideas on what the company should do with them: sell.

“GameStop can issue equity and should sell stock to pay down debt,” said Wedbush Securities Inc. analyst Michael Pachter, who had a price target of US$16 for GameStop as of Jan. 11. Doing so would involve “minimal dilution at these levels” and provide protection against an economic downturn. “They should do as much as the market will absorb,” he said. 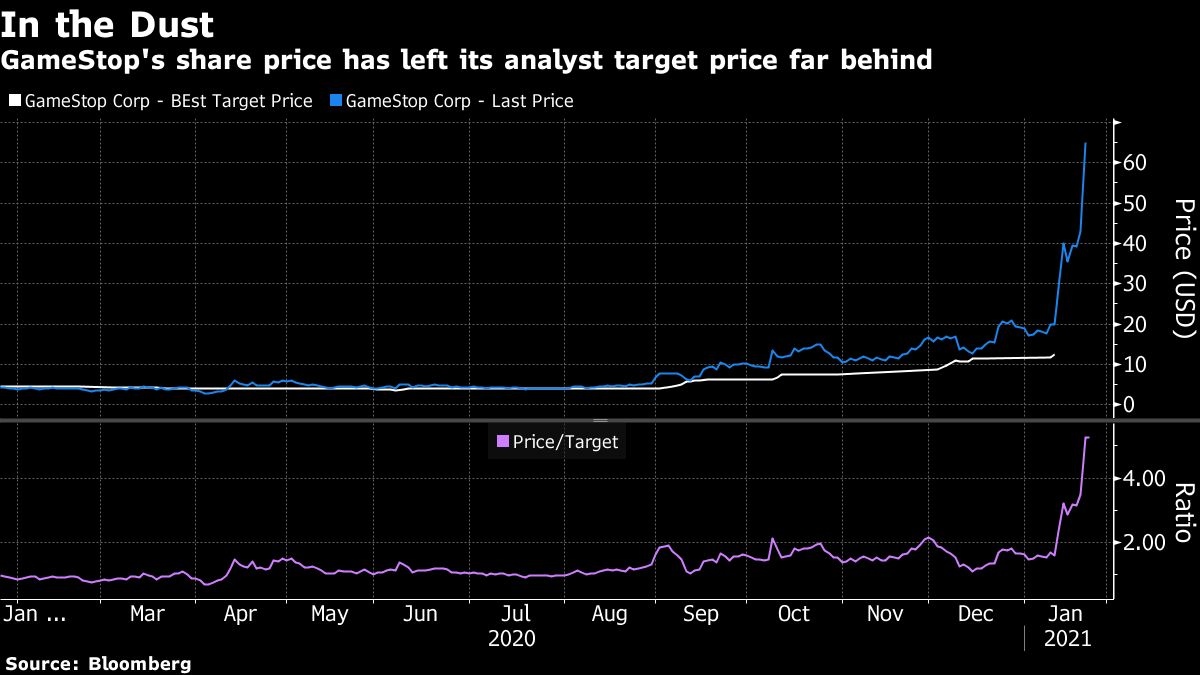 Whatever the future holds, the recent past has been a bonanza for anyone who dared own the stock -- or, even better, bullish options. Calls expiring Jan. 29 with a strike price of US$115 were the most-traded GameStop contract early Monday. Other similar wagers had correspondingly heady gains as contracts once seen as long-shot upward bets suddenly were in the money.

At investment research firm Hedgeye, analysts advised clients to not go short the stock, despite removing it from their “best idea long list” to reanalyze fundamentals. “Wouldn’t dare do that given the positive catalysts we think will be coming down the pike as the year progresses” with a very bullish calendar on the horizon, Brian McGough and Jeremy McLean wrote.

GameStop “has become a cult stock because of Ryan Cohen’s success with Chewy,” Wedbush’s Pachter said, referring to the activist investor and co-founder of online pet retailer Chewy Inc., who joined GameStop’s board this month. “I cannot discount Mr. Cohen’s past successes and don’t know what he has in mind going forward, but I need to see their strategy before I give them credit for materially higher earnings power.”