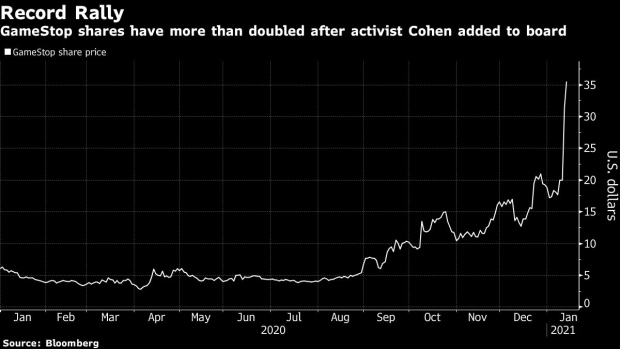 (Bloomberg) -- A four-day surge in GameStop Corp. on the back of retail-investor demand has added to the video-game seller $1.2 billion in market value since activist investor and Chewy Inc. co-founder Ryan Cohen joined its board on Monday.

The stock jumped 23% in early trading on Thursday and touched a high at $38.55, more than double its Friday’s closing price. Demand from day traders propping the company’s outlook on message boards and social media, combined with short covering, is fueling the seemingly unstoppable run.

The stock’s advance marks its best winning streak ever and comes in the face of skeptical analysts who had broadly advised investors to stay away. Still, many traders are betting the Grapevine, Texas-based retailer will undergo a renaissance, or be sold, after the arrival of Cohen and two other former Chewy colleagues to the board.

Telsey Advisory Group is the lone firm with a buy-equivalent recommendation on shares, according to data compiled by Bloomberg. That compares to four analysts who advise holding shares and three who recommend selling. Wall Street’s average price target of $12.36 implies downside of roughly 70% over the coming year.

Bets against the company have climbed over the past year with 138% of shares available for trading currently sold short, data compiled by S3 Partners shows. The need for investors to cover those positions is likely fueling a short squeeze and also fanning the stock’s run.