GameStop Corp. climbed Tuesday after completing an at-the-market offering program by selling 5 million shares for a total of US$1.13 billion via Jefferies.

Shares of the video-game retailer rose 10 per cent to US$220.40 after the announcement. It will use net proceeds from the offering to invest in growth initiatives and maintain a strong balance sheet, the company said in a statement released Tuesday.

GameStop is one of the Reddit-driven “meme” stocks that have soared this year. As retail traders have helped drive share prices of the so-called meme stocks higher, it’s been the companies that have benefited, said Greg Taylor, chief investment officer at Purpose Investments Inc.

“It’s been a lifesaver for a lot of these companies,” Taylor said in an interview, with firms taking advantage of moves in their stock prices to raise cash and fix their balance sheets and operations. “These were businesses that were really under pressure.” 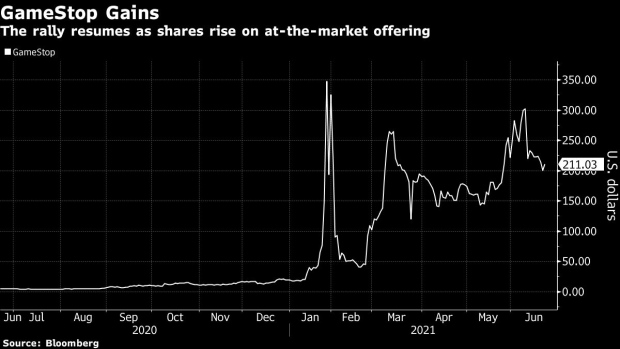 GameStop’s shares were sold for an average of US$225.20, based on a Bloomberg calculation, above the stock’s 50-day moving average of US$193.09. The total amount of shares sold represents the full capacity of its ATM authorization. It had announced on June 9 that it planned to sell as much as 5 million shares via an ATM offering.

An at-the-market offering deploys the historically unusual strategy of selling shares directly into the open market. Traditional stock offerings are sold almost entirely to institutional investors, but the rise of retail trading is leading corporate issuers with large followings among day traders like GameStop to cater their financings to go directly to individuals.

It’s the second time this year that GameStop tapped equity markets after raising US$551 million in April. Meme stocks have been using at-the-market offerings to raise capital because they target the retail investors who’ve been driving up shares in the open market.

Despite a sharp retrenchment since June 9, it’s still up over 1,000 per cent in 2021. Activist investor Ryan Cohen has built a 13 per cent stake in GameStop and is leading an effort to transform the video-game retailer into an e-commerce powerhouse, away from its brick-and-mortar roots.

The unusual trading of GameStop and others has drawn the interest of the Securities and Exchange Commission. GameStop said earlier this month that it received a request from the agency’s staff for “voluntary production of documents and information concerning an SEC investigation into the trading activity in our securities and the securities of other companies.” GameStop doesn’t expect the inquiry to adversely affect the company.