GameStop Corp. reported a fiscal third-quarter loss that was wider than analysts’ expected, while investors await word about how the struggling retailer intends to reshape its operations and lure gamers back. The shares fell in extended trading.

Separately, GameStop said it received a subpoena in August from the Securities and Exchange Commission asking for documents, following up on an initial request in May regarding an investigation by the agency into the trading activity of GameStop’s securities and those of other companies. GameStop said in a filing that the inquiry isn’t expected to adversely affect the company.

Once an overlooked mid-size company whose prospects had seen better days, before gaming shifted to digital downloads from physical cartridges, GameStop became the poster child for the meme stock movement. It has been championed this year by retail investors who organize in online forums like Reddit and have boosted the stock by more than 800 per cent.

There is little fundamental reason behind the move and investors been waiting to hear more from Ryan Cohen, the co-founder of pet supply company Chewy Inc. who joined the board earlier this year with a vision to turn GameStop into a competitor of Amazon.com Inc.

Cohen, an activist investor and major shareholder, has outlined a strategy for GameStop to face off more directly with the world’s most valuable online retailer with a broader array of digital products and services, and plans to invest in e-commerce fulfillment and customer care efforts. GameStop appointed Matt Furlong, a former Amazon executive, as chief executive officer in June.

But Cohen has said very little since he was elected chairman six months ago and announced that he was “putting the right pieces in place.” There have been a few cryptic tweets, but during the last three earnings calls, in March, June and September, the GameStop team took no questions.

Net sales rose 29 per cent to US$1.3 billion in the three months ended Oct. 30, the company said Wednesday in a statement. Analysts, on average, projected US$1.19 billion, according to data compiled by Bloomberg. GameStop reported an adjusted loss of US$1.39 a share compared with analysts’ average estimate of a loss of 52 cents a share. 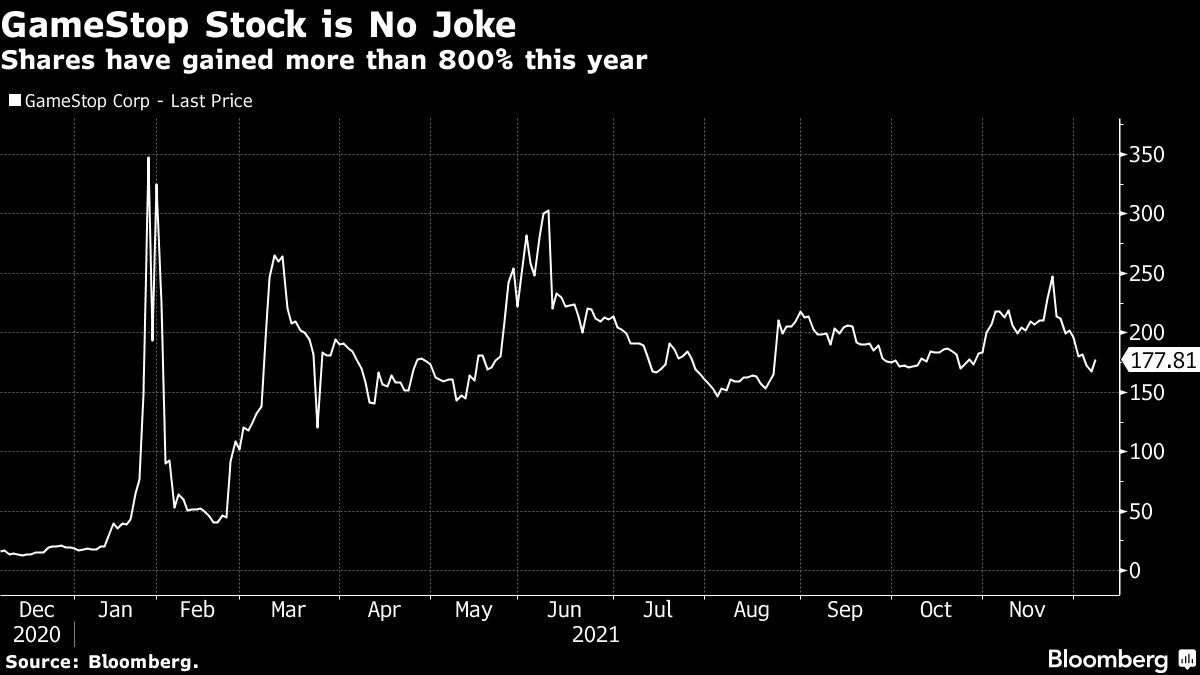 After years of double-digit declines in sales, revenue has increased every quarter this year and the company’s debt is almost gone, but GameStop has reported a profit in just one of the last seven quarters. While the company started bleeding cash long before the Covid-19 pandemic hit, lockdowns didn’t help. The Grapevine, Texas-based company shuttered hundreds of stores amid falling sales and relentless competition from Amazon.

Wedbush Securities analyst Michael Pachter said earnings “don’t matter at all” at a time when the market is focused on the strategy for the future. Pachter, who rates GameStop a sell, is among the three Wall Street analysts who still have ratings on the stock, down from nine a year ago.

While GameStop’s meteoric rise is hard to ignore, with a rally that far exceeds the 61 per cent gain for a basket of 37 meme stocks tracked by Bloomberg, the lack of clarity on the turnaround strategy, combined with a broad selloff in risk assets, has weighed on GameStop shares lately. The stock is down about 29 per cent from the most recent high on Nov. 22. It declined to a low of US$160 in extended trading after closing Wednesday at US$173.65 in New York.