In the wild, speculative ride known as GameStop Corp., traders are about to get a real-world dose of data when the video-game retailer reports earnings next week. Whether the results justify the company’s US$14 billion market value is another issue entirely.

While shares of the Grapevine, Texas-based company have given back a huge chunk of this year’s 2,460 per cent gain after hitting a record intraday high of US$483 in late January, they’re still up better than 900 per cent, closing Thursday at US$201.75. Skeptics are warning amateur investors who piled into the stock that this remnant of their euphoria could still come crashing down.

“The current valuation far exceeds our high fundamental expectations and projected multiyear benefits from the transformation,” wrote Telsey’s Joseph Feldman, one of the stock’s bearish analysts. “The company has yet to show financial success in an industry that is rapidly shifting to digital.”

GameStop gave back as much as 9.5 per cent during Friday morning trading. volatile swings have been triggered by the frenzy of Reddit-fueled retail traders and optimism surrounding a shake-up led by Chewy Inc. co-founder and activist investor Ryan Cohen. With the first quarterly update of the year set for March 23, the options market indicates that investors should expect a wild session, with an implied one-day move of roughly 24 per cent. At Thursday’s prices, that could mean a range of about US$97 a share. 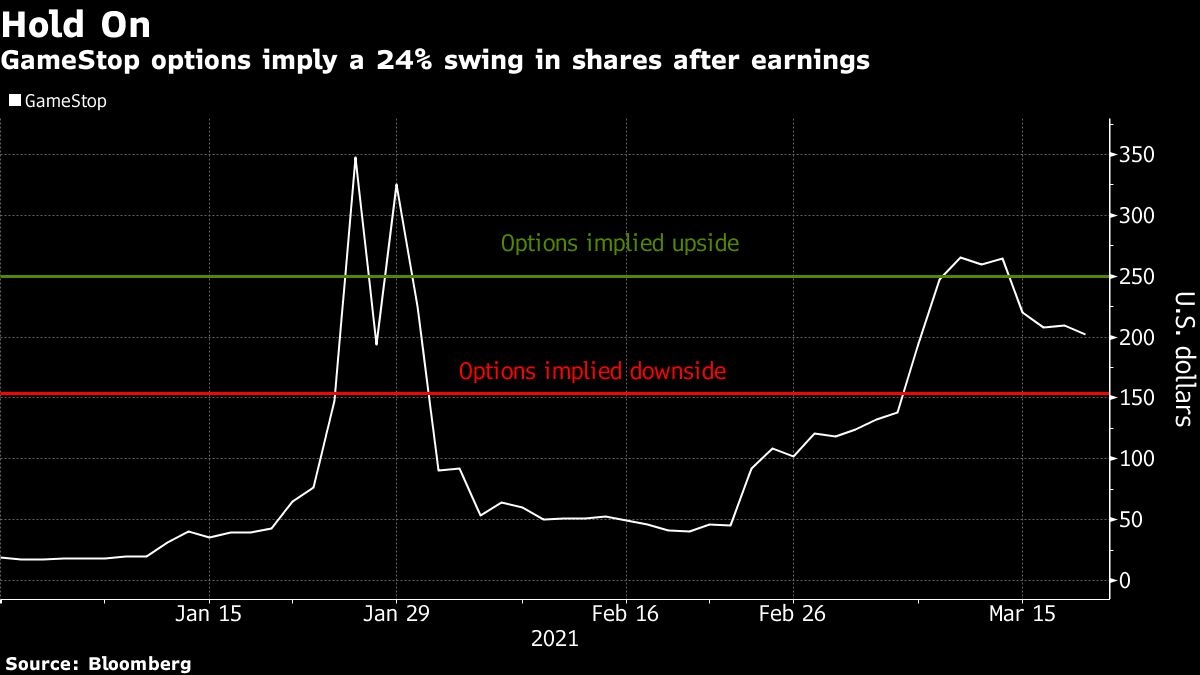 GameStop’s market value soared to US$33.7 billion, making it briefly the largest company in the Russell 2000, before tumbling to US$2.68 billion and then recovering as a new wave of investors rushed in.

A short squeeze may have fueled January’s rally, with bets against 140 per cent of the shares available for trading. Since then, short interest as a percentage of the float has plummeted to 14 per cent.

Some of Wall Street’s marquee names came out on top, with Bill Gross, the billionaire investor and co-founder of Pacific Investment Management Co. better known for bonds, saying he made US$10 million betting against the company.

GameStop has been shunned by Wall Street for the better part of the past four years and remains unloved by analysts. None of the seven firms that follow the retailer recommends it, with four advising investors to hold the stock and three rating it at sell. The average analyst price target of US$15.08 as of Thursday implies a 93 per cent drop over the next 12 months.

Wedbush analyst Michael Pachter warned clients to stay away, with GameStop’s value “completely disconnected from the fundamentals of the business.”

While retail bulls have continued to take to platforms like Reddit and Twitter to brag about their diamond hands, history shows investors should brace for a bumpy ride next week. The stock has slumped more than 10 per cent on the day following its earnings report over the past 10 quarters.

The absence of any actual profit to report may have played a role. On a GAAP basis, GameStop posted losses in eight of those periods, with cumulative losses now topping US$1.4 billion.

What’s more, the stock fell in nine of those 10 sessions, with drops as large as 36 per cent -- and that was without this year’s sky-high hopes.