Retail investors are making a change for the good: WallStreetBets founder

GameStop Corp. snapped a dizzying six-day rally to wipe out nearly US$11 billion in market value after moves by brokerages to curb trading of the stock on their apps whipped up volatility and enraged the company’s retail fanbase.

The stock plunged 44 per cent Thursday after Robinhood Markets, Interactive Brokers Group Inc. and others took steps to curtail activity in several high-flying stocks, including GameStop and AMC Entertainment Holdings Inc. E*Trade Financial is preventing customers from purchasing shares of both firms, according to a person familiar with the matter.

The video-game retailer’s triggered 19 volatility halts on its way to shedding more than twice what it was worth on Monday. Volume also fell, with about 55 million shares traded by Thursday afternoon, a far cry from Friday’s record of 197 million.

The trading curbs resulted in howls of outrage on Reddit’s WallStreetBets forum, which has been the launching point for many of this week’s blistering rallies, and Robinhood was hit by lawsuits from customers. 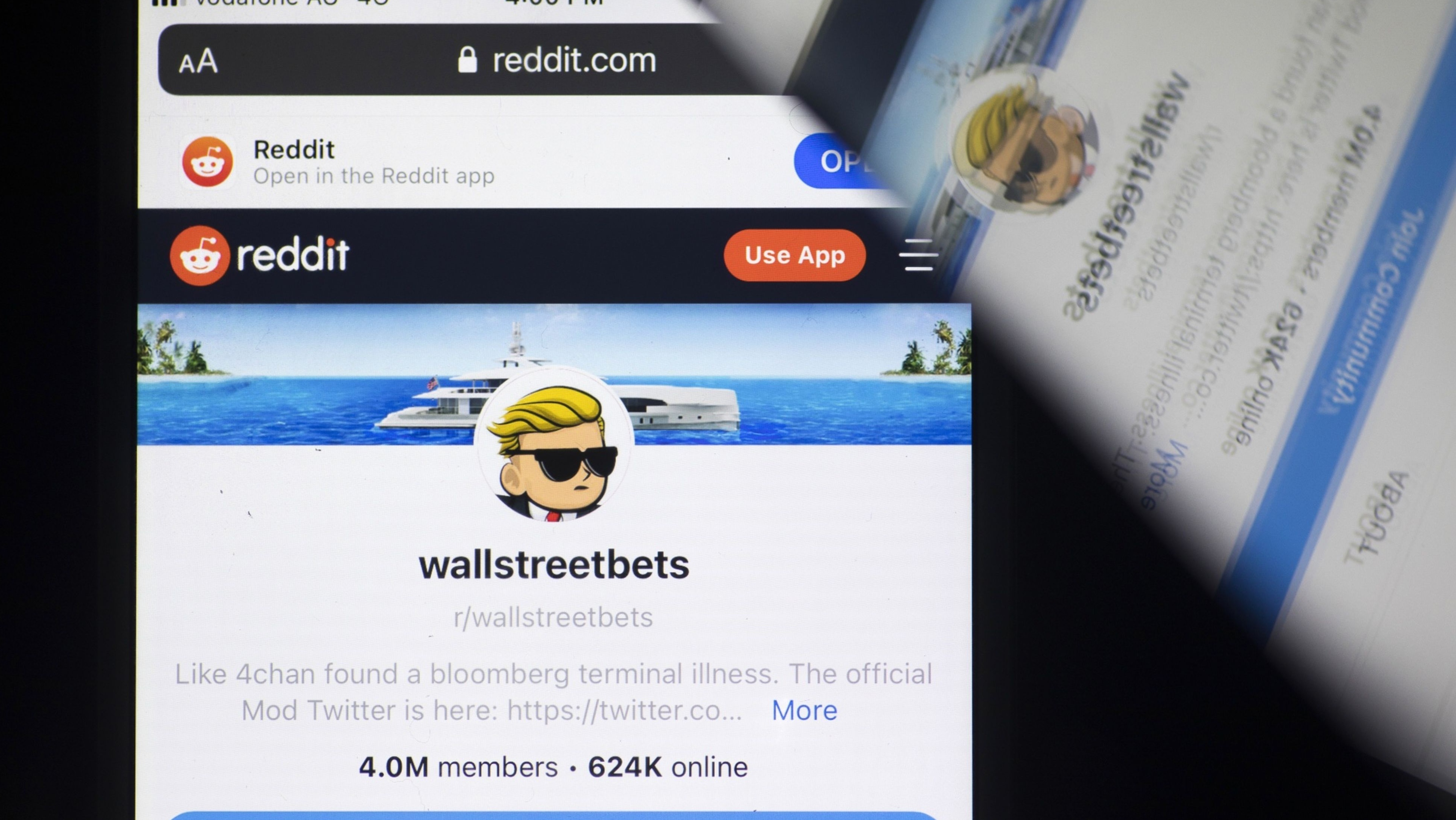 Who do you support in the tug of war over GameStop?

It also prompted lawmakers to criticize restrictions imposed on retail investors. Democratic Senator Sherrod Brown, the incoming Senate Banking Chairman, said he plans to hold a hearing on the “current state of the stock market.”

The clampdown by brokerages extended beyond GameStop to other popular stocks such as BlackBerry Ltd. that have surged this week, burning short sellers and hedge funds. The phenomenon attracted the attention of regulators Wednesday, with the Securities and Exchange Commission saying it was actively monitoring the situation.

“The inability to trade depressed the volume, and high volume is what kept the stock trading at a high level,” said Wedbush Securities Inc. analyst Michael Pachter. “I’m actually surprised the trading platforms think they can manage the market this way, and expect they will reverse their decision shortly.

For a brief moment Thursday morning, GameStop became the biggest stock on the Russell 2000, taking over from Plug Power Inc. The video-game retailer has advanced more than 900 per cent this year, fueling a rally in retail trading across the board and leading some short sellers to throw in the towel. However, that rally seemed to stall out on Thursday.

“With a company like GameStop, at some point it comes back to Earth. Even the folks on Reddit know that,” said Jerry Braakman, chief investment officer of First American Trust in Santa Ana, California, which manages around US$2 billion. “The market’s going to find the right price, the price that’s not a short-term squeeze price.”

Trading has remained volatile since the last regular U.S. session, in which the stock rose 135 per cent. Gains were briefly pared postmarket after the Reddit page that has fueled this month’s surge was made private and then later reopened by the group’s moderators. In the time the original WallStreetBets board was down, an alternate forum called Wallstreetbetsnew topped 350,000 members.

“This will burn itself out, like any other mania, but there will likely to be some impact on the market as a whole,” said Marshall Front, chief investment officer at Front Barnett Associates. “That these eye-popping moves happen after a nearly 70 per cent move in the S&P since March shows there’s plenty of room for a pullback.”

GameStop shares would be worth US$125.75 in a best-case scenario, compared to its close of US$193.60, said Baird analyst Colin Sebastian. That assumes a successful transition that maintains its current market share, preserves its used-game business, and diversifies into other services, he wrote in a report.

Sebastian laid out four different scenarios for the stock, ranging from “bright blue sky” to “storm cloud.” Baird has a US$13 share price target with a hold-equivalent rating.

GameStop’s rise has prompted analysts at Citigroup Inc. to warn investors that some exchange-traded funds face an outsized influence from the video-game retailer as its boom has altered their composition. Analyst Scott Chronert advised clients to take “special note” of ETFs that incorporate leverage in their funds. A larger allocation to the stock may materially change fund performance for now until rebalance dates occur, he said in a report.

The Reddit community has dominated equities trading all week as retail traders target heavily shorted shares, causing ripples across the market. Investors including Melvin Capital closed out its short position on GameStop, while Muddy Waters’s Carson Block said he “massively reduced” its short positions in recent days to avoid getting burned.

“It’s hard to say what is next, but the chat room investors may not go away so easily,” said Joseph Feldman, analyst at Telsey Advisory Group. He double-downgraded the stock to underperform from outperform on Monday, removing GameStop’s only buy-equivalent recommendation.