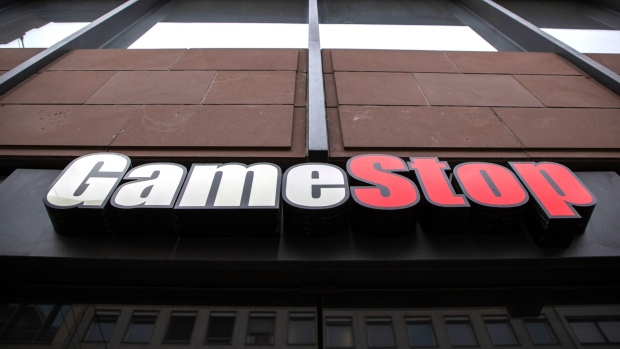 GameStop Corp. tumbled as much as 34 per cent as bearish investors appeared to cover their positions while retail traders flocked to other corners of the market.

The video-game retailer fell for the second time in three sessions as trading volume also slowed after last week’s sharp gains. The decline came as bets against the company appeared to plummet, according to a pair of market intelligence firms.

The shares pared declines to 31 per cent at the close and ended the session at US$225 in New York, wiping out US$7 billion in market value. About 34 million shares were traded late afternoon, or about a third the amount over the past five sessions.

GameStop’s decline came as short interest for the company plunged to 53 per cent of its available shares, from more than 140 per cent just last month, according to data from financial analytics firm S3 Partners.

Restrictions on the amount of shares investors can buy using the popular trading app Robinhood Markets Inc. likely held retail investors at bay. The platform loosened restrictions on Monday afternoon to allow users to purchase a limit of 20 shares of GameStop. That’s up from a cap of one share before the market opened.

The lower number of shares sold short could also deal a blow to day traders’ thesis that a higher stock price would only result in more gains as hedge funds who bet against the Grapevine, Texas-based company would need to cover their shorts.

“The volume is down a lot over the past few days, so that suggests that shorts aren’t pressing as hard as they were and longs aren’t getting the desired short squeeze,” said Wedbush Securities analyst Michael Pachter. “Impossible to know for sure, but the [WallStreetBets] ‘trade’ was to bid the share price up and force shorts to cover.”

Those efforts worked through January as GameStop surged 400 per cent and added US$18 billion in market value. However, the apparent covering by some short sellers and restrictions like Robinhood’s limiting of users to purchase GameStop shares poured cold water on the video game-retailer’s rapid ascent.

“The restrictions obviously hurt the support level for the stock as there are likely more retail investors in this trade,” said Amy Kong, chief investment officer of Barrett Asset Management. “Fundamentals are completely out the window, but there’s a really short-term gambling trade that’s highly in effect.”

Backlash against short-sellers including Citron Research had been a key rallying point for retail traders using Reddit to communicate about their bets. The mania spread to companies like AMC Entertainment Holdings Inc. which saw record volatility as trading volumes soared last week.

This euphoria, which was born in day-trader chat rooms, has been cast a wary eye by Wall Street pros and the analysts that cover the retailer. Analyst price targets imply the stock will fall another 95 per cent of the coming year.

Still, given retail investors’ commitment to the stock, Monday’s declines may be short-lived, according to Kong.

“This may be kind of like last week where you saw GameStop down more than 40 per cent, but once the restrictions are modified or lifted you may see a resurgence of the stock again,” she said by phone. “I don’t want to discount the retail investor, especially as they group together.”