GameStop Corp.’s Reddit-fueled trading surge is likely going to fade as threats from digital game downloads sink in, according to one skeptical Wall Street analyst.

The stock slumped after Ascendiant Capital Markets analyst Edward Woo downgraded the retailer to sell from hold, saying increasing digital sales for video-game publishers is a looming risk given GameStop’s minimal market share. He warned clients in a note about the long-term prospects for the company as the market for new gaming systems matures after new launches from Microsoft Corp. and Sony Group Corp.

The video-game retailer’s 741 per cent surge this year through Friday’s close pushed its market value to US$11 billion, however, Woo expects shares will tumble in the long run “to match its current weak results and outlook.” He trimmed his price target to US$10 from US$12, implying as much as a 94 per cent drop from Friday’s close at US$158.36. 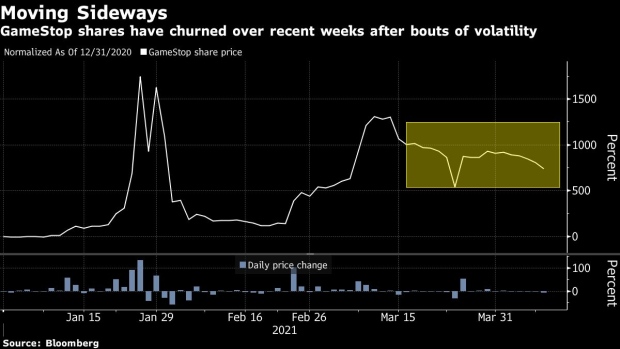 Shares of the Grapevine, Texas-based company reversed initial gains to slump as much as 11 per cent at 9:58 a.m. in New York. The stock has shed a quarter of its value in the past six session after a company plan to sell as much as US$1 billion in additional shares.

Ascendiant called out the rise in popularity of GameStop on Reddit chat boards and with Robinhood investors for making shares trade on “retail investors sentiment, hope, momentum, and the powers of crowds” in place of fundamental metrics. Woo did acknowledge the mania can drive shares much higher in the near-term, making short-term price forecasts “nearly impossible.”

The stock now has five sell-equivalent ratings, compared to two hold ratings and zero buys, data compiled by Bloomberg show. An average price target of US$46.50 implies shares will lose more than two-thirds of their value in the coming year.