After posting disappointing earnings in the fourth quarter, GameStop Corp. is looking to make good on a comeback plan that has inspired investors and helped turn it into the year’s hottest stock.

The company appointed a trio of new executives with tech experience to its ranks on Tuesday, part of a push by activist investor and board member Ryan Cohen to make the brick-and-mortar chain an e-commerce power. The most prominent among them: Jenna Owens, a veteran of Amazon.com Inc. and Google, who will become GameStop’s No. 2 as chief operating officer.

Neda Pacifico -- another former Amazon executive who worked at Cohen’s previous company, Chewy.com -- will become senior vice president of e-commerce. And Ken Suzuki, who comes from Zulily Inc., will be vice president of supply-chain systems. The new executives all begin on March 29, GameStop said Tuesday in conjunction with its fourth-quarter results. 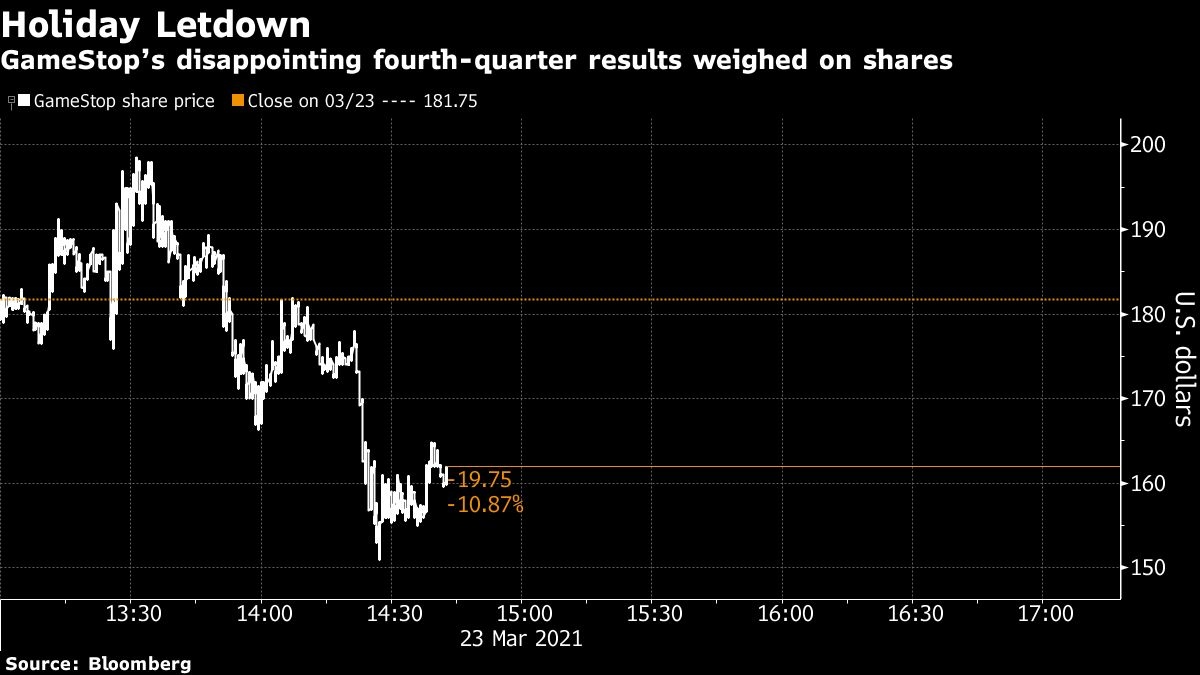 With the changes, the video-game retailer is trying to look past a sluggish holiday results that sent the shares sliding on Tuesday. Though a new generation of game consoles helped spur purchases, the company didn’t get as big a bump as expected. Profit in the period ended Jan. 30 came to US$1.34 a share, excluding some items. That compared with an average projection of US$1.43 from analysts.

Net sales fell 3.3 per cent to US$2.12 billion, short of the US$2.24 billion estimate. Still, the console surge helped same-store sales grow 6.5 per cent in the period, with online revenue advancing 175 per cent. The company’s product mix swung more toward hardware sales, which carry lower margins. The retailer closed a total of 693 stores in its last fiscal year.

“The big takeaway is that the report didn’t give much new ammunition for bears on the name, even though it didn’t do much to highlight the new direction,” said Doug Clinton, an analyst at Loup Ventures.

The year’s huge gain in the stock, led by small investors on Reddit who triggered a short squeeze, has led to hearings in Congress and lifted the company’s market value to almost US$13 billion.

Investors were expecting more guidance from GameStop on its new strategic direction. In recent months, Cohen has pushed the chain to refocus on e-commerce and a wider assortment of goods. Even before Tuesday’s additions, Ryan had brought in a number of new executives, including a chief technology officer and Chewy’s former vice president of customer care.

GameStop’s chief financial officer was pushed out last month as part of the revamp, and was followed Tuesday by another senior executive.

The company declined to take questions on a call with investors late Tuesday, and Cohen didn’t make an appearance.

“We are optimistic about our transformation and the console cycle,” Chief Executive Officer George Sherman said on the call.

GameStop, based in the Dallas suburbs, has suffered with the video-game industry’s shift to online distribution. With gamers downloading more and more -- or at least ordering software and gear via e-commerce -- there’s less reason to make a trip to a physical store. That’s why the company’s bid to mimic Amazon is so crucial to its future.

The stock initially rose in late trading following the results, but slipped as much as 17 per cent. Shares of the retailer have soared more than ninefold this year, fueled by day traders willing to overlook the GameStop’s history of shrinking sales and shuttered storefronts. The company had about 5,000 stores as of Oct. 31.

Many analysts are wary of the company’s latest turnaround efforts, with three recommending investors sell the stock and four rating it hold. “E-commerce may not be saving grace,” Matt Kanterman, a Bloomberg Intelligence analyst, said in a recent note.